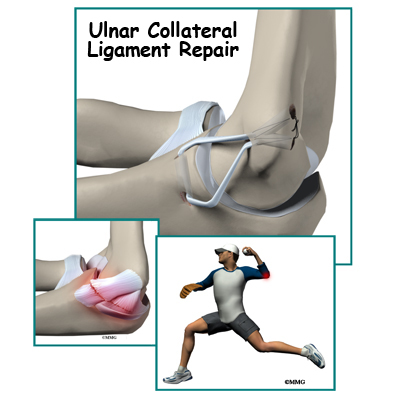 The doctors call it a UCLR ulnar collateral ligament reconstruction. Baseball players and fans call it Tommy John surgery — named after the pitcher (Los Angeles Dodgers) who was the first to have the surgery in 1974. It is one of the major advancements in sports medicine in the last quarter century.

This guide will help you understand: 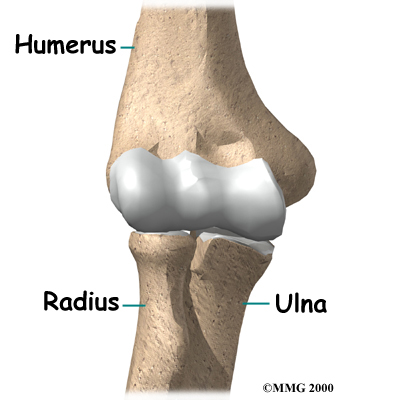 What’s the normal anatomy of the elbow? 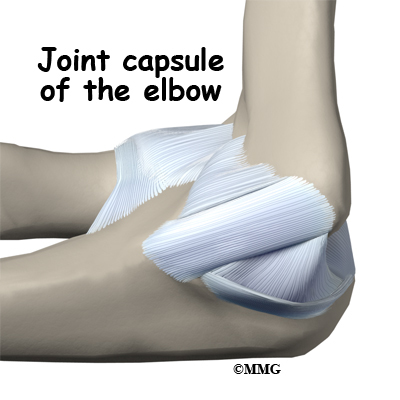 There are several important ligaments in the elbow. Ligaments are soft tissue structures that connect bones to bones. The ligaments around a joint usually combine together to form a joint capsule. A joint capsule is a watertight sac that surrounds a joint and contains lubricating fluid called synovial fluid. 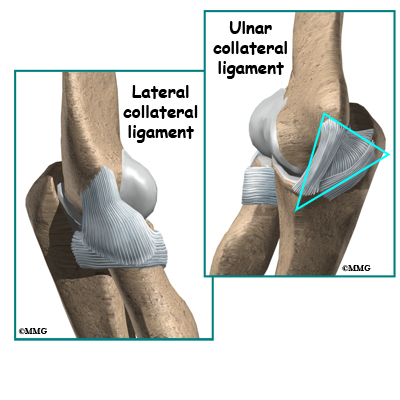 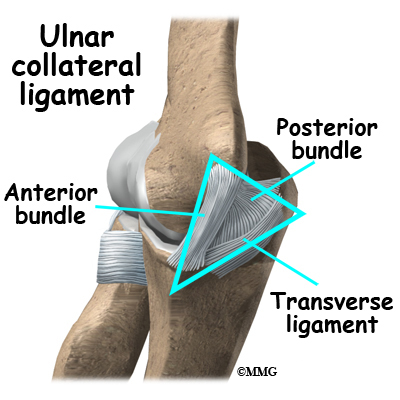 Together these two ligaments, the ulnar (or medial) collateral and the lateral collateral, connect the humerus to the ulna and keep it tightly in place as it slides through the groove at the end of the humerus. These ligaments are the main source of stability for the elbow. They can be torn when there is an injury or dislocation of the elbow. If they do not heal correctly the elbow can be too loose or unstable. The ulnar collateral ligament can also be damaged by overuse and repetitive stress, such as the throwing motion.

What does my surgeon hope to achieve?

Surgical treatment is designed to restore medial stability of the elbow. Full return to previous activities is the main goal. This is especially true for those athletes who want to remain active and competitive in sports. Many throwing athletes who develop this condition have pain in the elbow during and after throwing activities. They may also develop numbness and tingling in the hand due to stretching of the ulnar nerve at the elbow. Successful treatment of the condition should improve or eliminate these symptoms.

Who can benefit from this procedure?

How should I prepare for surgery?

The decision to proceed with surgery must be made jointly by you and your surgeon. You need to understand as much about the procedure as possible. If you have concerns or questions, you should talk to your surgeon.

Once you decide on surgery, you need to take several steps. Your surgeon may suggest a complete physical examination by your regular doctor. This exam helps ensure that you are in the best possible condition to undergo the operation.

On the day of your surgery, you will probably be admitted to the hospital early in the morning. You shouldn’t eat or drink anything after midnight the night before. 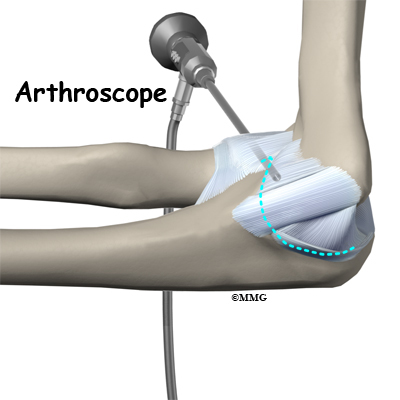 If you are having problems that may be coming from inside the joint, such as arthritis and loose bodies, your surgeon may perform an arthroscopy before the actual reconstruction procedure is done. During this procedure, a small TV camera is inserted into the elbow joint through two or three small (1/4 inch) incisions. Using special instruments your surgeon will be able to evaluate the joint, remove any loose bodies and bone spurs that may be causing problems. Arthroscopy is not always necessary. 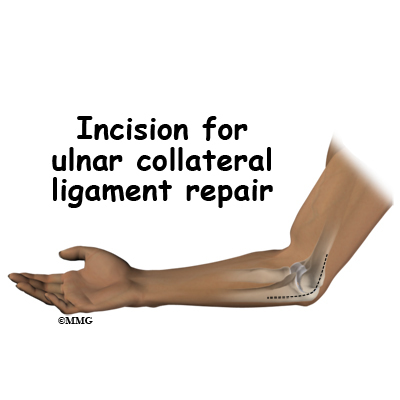 The reconstruction is performed through an incision on the medial (inside) side of the elbow joint. The damaged ulnar collateral ligament along the medial side of the elbow is replaced with a tendon harvested from somewhere else in the body. The tendon graft can come from the patient’s own forearm, hamstring, knee, or foot. This is called an autograft.

Over the years the way that surgeons perform this operation have improved. In the early days, the muscles on the inside of the elbow joint and forearm (the flexor muscles) were completely detached from the humerus and the ulnar nerve was re-routed from its normal position in the cubital tunnel on the back side of the elbow. This was done to be able to see the joint and protect the nerve. As surgeons have understood this problem more completely, these two parts of the operation have been eliminated. Now, the flexor muscles are not detached, but are split and retracted to allow the surgeon to see the areas of the elbow joint required to perform the operation successfully. The ulnar nerve is re-routed only if the patient was having symptoms of ulnar nerve damage before the operation. These improvements have resulted in a less invasive procedure with a decreased rate of complications. 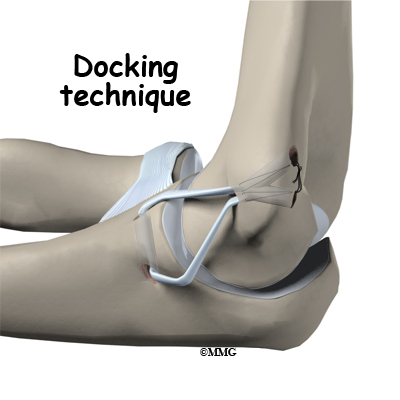 One common technique used to replace the damaged ulnar collateral ligament is called the docking technique. The surgeon drills two holes in the ulna and three in the medial epicondyle (the small bump of bone on the inside of the elbow at the end of the humerus). The two holes in the ulna form a tunnel that the tendon graft will be looped through. The three holes in the medial epicondyle form a triangle. The bottom hole will be bigger than the top two holes, so that the surgeon can slide the end of the tendon graft into the bottom hole. The two top holes are used to pull the tendon graft into the tunnel using sutures that are attached to the graft and threaded through the two holes.

After the tendon is harvested, sutures are attached to both ends. The tendon is looped through the lower tunnel formed in the ulna, and stretched across the elbow joint. The two sutures attached to the ends of the graft are threaded into the larger bottom tunnel in the medial epicondyle and each is threaded out one of the upper, smaller holes.

Using these two sutures, the surgeon pulls the end of the graft farther into the upper tunnel until the amount of tension is correct to hold the joint in position. The surgeon carefully puts the elbow through its full arc of motion and readjusts the tension on the sutures until he is satisfied that the proper ligamentous tension is restored. The two sutures are tied together to hold the tendon graft in that position. 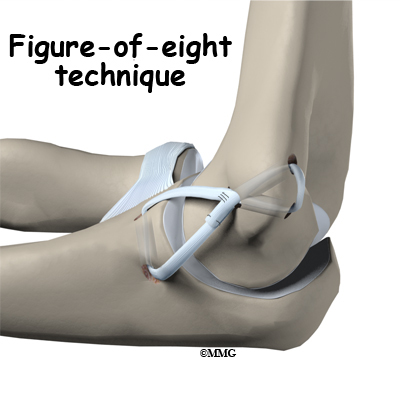 If there is any concern that the ulnar nerve has been stretched and damaged due to the instability (as mentioned above), it may be re-routed so that it runs in front of the elbow joint rather than through the cubital tunnel in the back of the elbow. The incision is sutured together and the elbow is placed in a large bandage and splint.

There are several newer techniques being developed that hopefully will make the procedure even less invasive while retaining the success that the docking technique has enjoyed.

Because the operation is performed so close to the nerves and vessels, it is possible to injure them during surgery. All of the nerves that travel down the arm pass across the elbow. The ulnar nerve is especially at risk for damage. Problems such as pain, numbness, and weakness in the arm and hand can be the consequences of nerve scarring, entrapment, or traction injury from the original trauma or from the procedure.

This condition is called a neuropathy. It may be temporary with gradual resolution of symptoms over a period of many months. If it doesn’t resolve on its own or with physical therapy, further surgery may be needed. In a small number of cases, this complication is permanent.

Studies show that up to half of the patients treated by ligament reconstruction are left with a loss of full motion. The main problem is a five to 10 degree loss of extension (the elbow doesn’t straighten all the way). This deformity does not affect strength or function. Earlier, more aggressive rehab may restore motion but at the risk of impaired healing of the graft.

Long-term complications can include chronic pain with throwing and chronic instability of the elbow.

The postoperative program is the same for repairs or reconstruction. At first your arm will be immobilized in a bulky dressing and a posterior splint for the first 10 days. It holds the elbow in a position of 90 degrees of flexion and neutral forearm rotation while leaving the wrist free to move. If non-absorbable sutures are used to close the incision, you may need these removed in 10 days.

You’ll have about a four-inch long incision along the inside of your elbow. There may be some discomfort after surgery. Your surgeon can give you pain medicine to control the discomfort. You should keep your elbow elevated above the level of your heart for several days to avoid swelling and throbbing. Keep your elbow propped up on a stack of pillows when sleeping or sitting.

What should I expect during my rehabilitation?

Gentle hand grip and shoulder and wrist mobilization exercises are allowed right away after surgery. Postoperative immobilization is discontinued in seven to 10 days at which time active range of motion for the elbow are started. Your surgeon may want you to wear a special hinged brace to protect the elbow.

Your therapist will instruct you in the active range of motion exercises to be done daily. Strengthening exercises for the entire upper quadrant (shoulder, arm, wrist, and hand) are included in the post-operative program. Specific strengthening exercises to help the athlete prepare for his or her particular sport begin around four months post-op. Up until this time, any stress to the medial elbow is avoided.

With careful adherence to the rehab program and completing the exercises daily, pitchers can get their full range of motion back in six to eight weeks. The program will progress to strength training with weight exercises. For the next four months, they can increase the weight they use and start doing exercises that emphasize all parts of their arm.

Flexibility, conditioning, coordination, and strengthening are part of the daily program. You may use ice after throwing sessions to help control inflammation. Plyometric exercises are used throughout the training period. An aerobic portion of the exercise program is also advised to help the athlete return to sports at the same level (or even higher level) as before the surgery. Good, overall physical condition is important to prevent injury as the athlete returns to sports activity.

At times in your rehab and recovery, you may find it necessary to move back to a previous level of training if symptoms of pain and swelling recur. Your therapist will guide you through the advancement (and regression) of your program. Additional training to restore normal joint proprioception (sense of joint position) and proper throwing mechanics is also provided.

Based on long-term studies of athletes over the years, the chances of a complete recovery after surgery are estimated at 85 to 90 percent. The process of rehabilitation to return to a level of playing equal to before the injury takes about a year for pitchers and about six months for position players.

The most often used criteria for resuming full (competitive) sports participation include 1) no pain with throwing, 2) full shoulder and elbow range of motion, 3) normal forearm strength, and 4) good throwing biomechanics.

The tendon graft is very weak immediately after the surgery. Transforming a tendon into a functioning ligament requires a very gradual rebuilding process. Athletes are encouraged to go slowly and not test the limits of the graft. The key to a successful UCLR (Tommy John) is to rehab for a long-term career, not to try for shortcuts during the first year of recovery.