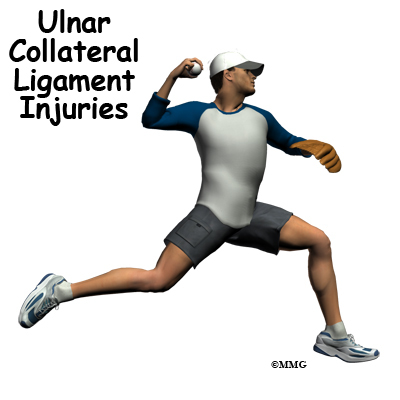 Professional pitchers have been the athletes treated most often for this problem. Javelin throwers and football, racquet sports, ice hockey, and water polo players have also been reported to injure the UCL. A fall on an outstretched arm can also lead to UCL rupture (often with elbow dislocation). 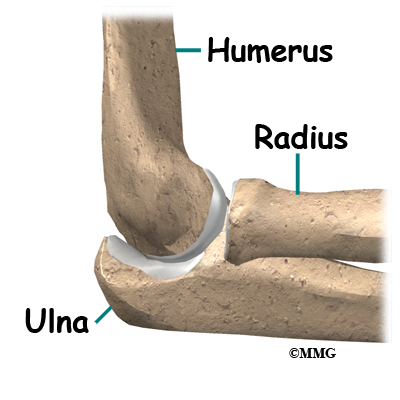 What parts of the elbow are affected? 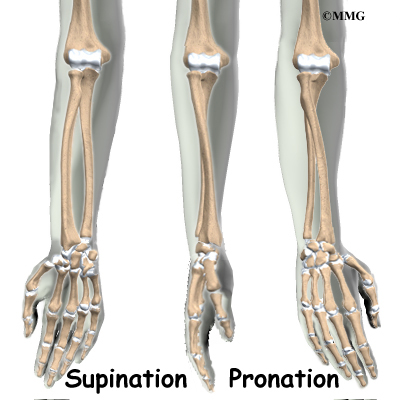 The elbow itself is essentially a hinge joint, meaning it bends and straightens like a hinge. But there is a second joint where the end of the radius (the radial head) meets the humerus. This joint is complicated because the radius has to rotate so that you can turn your hand palm up and palm down (pronation/supination). At the same time, it has to slide against the end of the humerus as the elbow bends and straightens.

There are several important ligaments in the elbow. Ligaments are soft tissue structures that connect bones to bones. The ligaments around a joint usually combine together to form a joint capsule. A joint capsule is a watertight sac that surrounds a joint and contains lubricating fluid called synovial fluid. 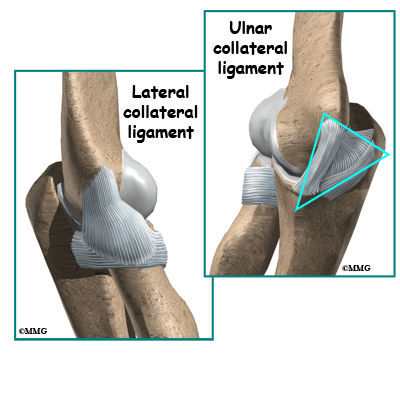 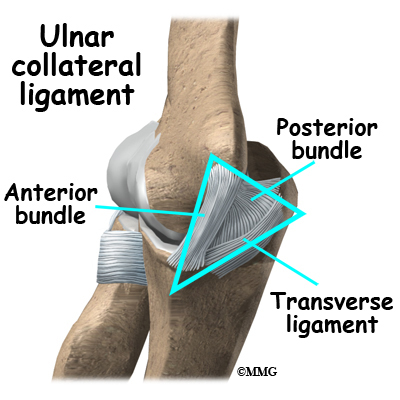 Together these two ligaments, the ulnar (or medial) collateral and the lateral collateral, connect the humerus to the ulna and keep it tightly in place as it slides through the groove at the end of the humerus. These ligaments are the main source of stability for the elbow. They can be torn when there is an injury or dislocation of the elbow. If they do not heal correctly the elbow can be too loose or unstable. The ulnar collateral ligament can also be damaged by overuse and repetitive stress, such as the throwing motion.

The ulnar collateral ligament can become stretched, frayed or torn through the stress of repetitive throwing motions. If the force on the soft tissues is greater than the tensile strength of the structure, then tiny tears of the ligament can develop. Months (and even years) of throwing hard cause a process of microtears, degeneration, and finally, rupture of the ligament. The dominant arm is affected most often. Eventually the weakened tendon my rupture completely causing a pop and immediate pain. The athlete may report the injury occurred during a single throw, but the reality is usually that the ligament simply finally became weakened to the point that it finally ruptured. 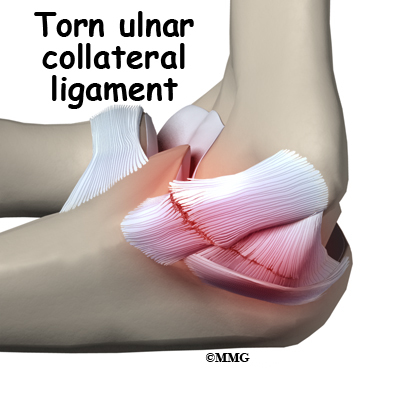 Professional pitchers have been the athletes treated most often for this problem. Javelin throwers and football, racquet sports, ice hockey, and water polo players have also been reported to injure the UCL. A fall on an outstretched arm can also lead to UCL rupture (often with elbow dislocation).

However, the general profile associated with this injury may be changing. Today, more and more children ages 10 to 18 are affected. Longer seasons with extended practice time and more tournaments increase the risk of UCL injury. Throwing volume, pitch type, and throwing mechanics can all contribute to the problem.

Children have their own unique risk factor in that they have an open growth plate in the elbow called the medial epicondylar physis. Force along the inside of the elbow during throwing is more likely to cause failure at the area of the growth plate than at the UCL. This injury is often termed Little League Elbow. Reconstruction of the UCL may not be needed in this age group unless the injury to the UCL occurs after the growth plate is closed. Sometimes the ligament avulses or pulls away, taking a piece of the growth plate with it. When the condition has been present for some time, the ligament is not all that may be damaged. The entire elbow joint is at risk due to the abnormal forces caused by the repetitive stress injury.

Related Document: A Patient’s Guide to Adolescent Osteochondritis Dissecans of the Elbow

Pain along the inside of the elbow is the main symptom of this condition. Throwing athletes report it occurs most often during the acceleration phase of throwing. If there are loose fragments or uneven joint surfaces, you may also notice popping, catching, or grinding.

Sometimes swelling can be seen along the inside of the elbow. If the ligament was ruptured, there may be bruising in the same area. Some patients have a slight loss of elbow motion. Closing the hand and clenching the fist reproduces the painful symptoms.

Sometimes swelling can be seen along the inside of the elbow. If the ligament was ruptured, there may be bruising in the same area. Some patients have a slight loss of elbow motion. Closing the hand and clenching the fist reproduces the painful symptoms.

The diagnosis is based on your history and symptoms. Your physician will complete an examination of the shoulder and elbow, performing specific tests to look for areas of tightness or laxity (looseness). Most patients will report tenderness along the inside of the elbow to palpation of the UCL ligament. 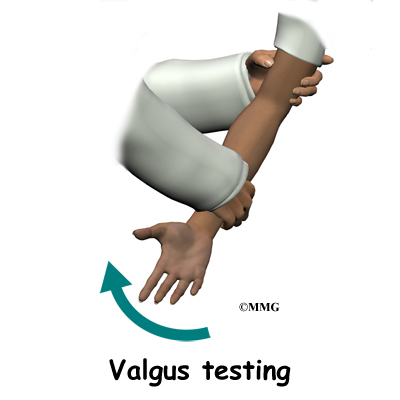 Valgus stress tests are done at the elbow to test for joint stability. The examiner places force toward the inside of the elbow as the joint is moved from a position of slight flexion into full extension. Too much motion or opening of the joint at the medial joint line called gapping may be observed or felt by palpation. The examiner may also feel the crepitation (popping, crunching) as the joint moves.

Standard X-rays are taken to look for bone spurs, loose fragments, or calcification in the ulnar collateral ligament. If the joint is gapping enough to sublux (partially dislocate), valgus stress radiographs may be taken.

Magnetic resonance imaging (MRI) with contrast dye is used to diagnose ligamentous rupture. The test doesn’t always show a problem when there is one. This is called a false-negative result. Ultrasound and CT scans may be helpful. Some surgeons prefer to use arthroscopy to make the final diagnosis. The presence and severity of valgus gapping can be confirmed. Studies using these more advanced test methods to diagnose UCL injuries are being done. More data is needed before they become routine in the diagnosis of UCL injuries.

Many athletes with elbow instability from UCL injury can be treated successfully with rehabilitation and without invasive procedures. At first, symptoms may be treated with rest and/or activity modification (fewer pitches per game, per practice, per day). The athlete’s posture, strength, and release of the ball must be analyzed and corrected. The use of curve balls should be avoided during the early phases of rehabilitation.

Antiinflammatory drugs and analgesics may be used to reduce pain and inflammation. Icing may help but must be used with caution. Too much cold can cause a worsening of the swelling as the body sends more blood to the area to warm things up. And cold can be an irritant to the already damaged (and irritated) nerve.

Many athletes are able to return to play without further treatment. If conservative (nonoperative) care does not change the picture, then surgery may be needed.

When the condition fails to respond to conservative care described above, surgery may be indicated. If pain is the primary symptom and there is no evidence that the elbow joint is grossly unstable, the surgeon may use an arthroscope (a tiny fiber-optic TV camera) to look inside the elbow and see the condition of the joint and the soft tissues. It may be possible to debride any tissue fragments or frayed edges. During debridement, the surgeon carefully cleans the area by removing any dead or damaged tissue. Any bone spurs or areas of calcium build-up are also removed. 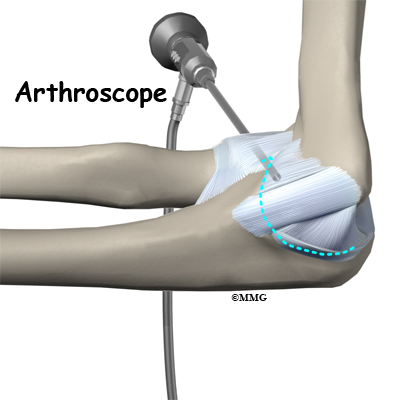 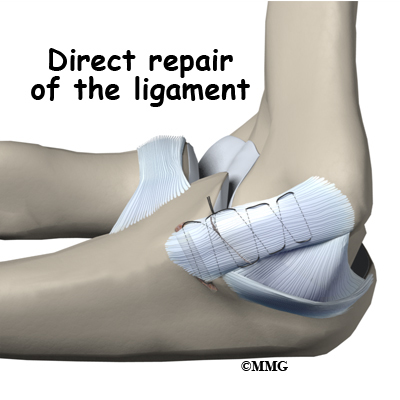 Other modalities such as electrical stimulation and ultrasound with cortisone (called phonophoresis) may be used by a physical therapist when needed. Steroid injections are not usually recommended for this condition.

The athlete will work with the physical therapist to develop a daily program of stretching and strengthening. Stretching exercises for the muscles of the forearm are included. A strengthening program for the entire elbow/arm complex will be prescribed. High repetition, low weight exercise training is used to increase endurance without placing additional stress across the joint.

The therapist will also address any problems with flexibility, strength, and conditioning at the shoulder. Plyometric strengthening of the entire arm starts with the forearm muscles (flexors and pronators) and progresses to include the biceps, triceps, and rotator cuff of the upper arm. Plyometrics refers to training the nerves to fire quickly and the muscles to contract strong and fast. Plyometrics help develop explosive movements to improve muscular power and force. The goal is to increase the speed of the pitch (or throw for other throwing athletes).

Gentle range of motion exercises are started right away. Full motion is restored as the pain and swelling resolve. Elbow strengthening exercises are begun within the first few days to week after the procedure. A rehabilitation program is started and progressed, including a gradual throwing program. Full sports participation can be anticipated within one to three months.

The postoperative program is the same for repairs or reconstruction. At first your arm will be immobilized in a bulky dressing.

You will be referred to a physical therapist to begin a rehabilitation program.

Gentle handgrip and shoulder and wrist mobilization exercises are allowed right away after surgery. Postoperative immobilization is discontinued in seven to 10 days at which time active range of motion for the elbow is started. Your surgeon may want you to wear a special hinged brace to protect the elbow.

Your therapist will instruct you in the active range of motion exercises to be done daily. Strengthening exercises for the entire upper quadrant (shoulder, arm, wrist, and hand) are included in the post-operative program. Specific strengthening exercises to help the athlete prepare for his or her particular sport begin around four months post-op. Up until this time, any stress to the medial elbow is avoided.