Slipped capital femoral epiphysis (SCFE) is a condition that affects the hip in teenagers between the ages of 12 and 16 most often. Cases have been reported as early as age nine years old. In this condition, the growth center of the hip (the capital femoral epiphysis) actually slips backwards on the top of the femur (the thighbone). If untreated this can lead to serious problems in the hip joint later in life. Fortunately, the condition can be treated and the complications avoided or reduced if recognized early. Surgery is usually necessary to stabilize the hip and prevent the situation from getting worse.

What part of the hip is affected?

The hip joint is where the thighbone (femur) connects to the pelvis. The joint is made up of two parts. The upper end of the femur is shaped like a ball. It is called the femoral head. The femoral head fits into a socket in the pelvis called the acetabulum. This ball-and-socket joint is what allows us to move our leg in many directions in relation to our body. 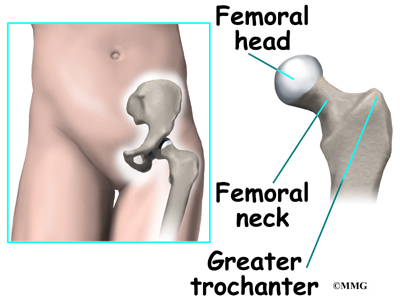 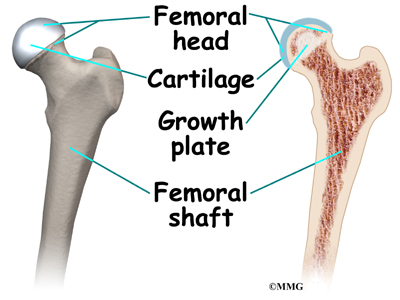 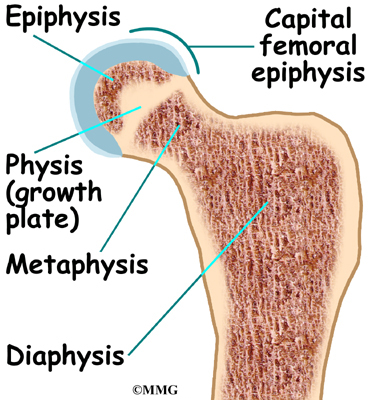 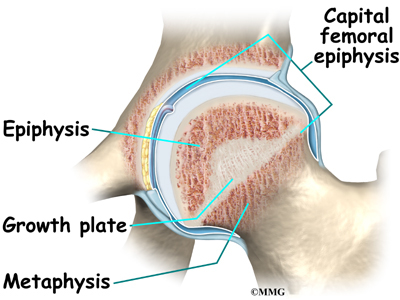 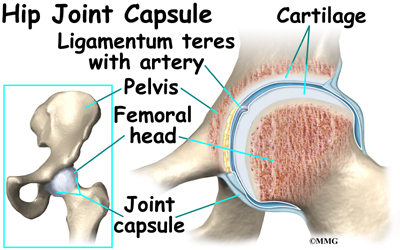 The capital femoral epiphysis is somewhat unique. It is one of the few epiphyses in the body that is inside the joint capsule. (The joint capsule is the tissue that surrounds the joint.) 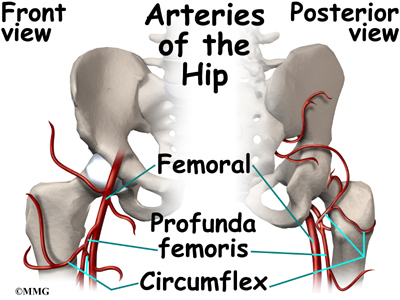 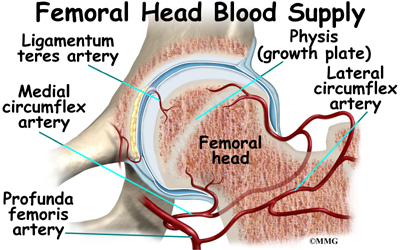 The blood vessels that go to the epiphysis run along the side of the femoral neck and are in danger of being torn or pinched off if something happens to the growth plate. This can result in a loss of the blood supply to the epiphysis. 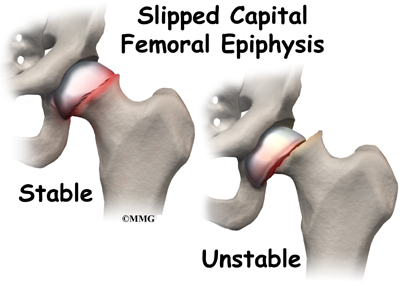 SCFE develops at a specific age. The changes occurring in the growing skeleton during puberty play into the chances that a child will develop SCFE. The cartilage epiphyseal plate is weaker than the surrounding bone. Children who are overweight are more prone to developing SCFE. This suggests that the main cause of SCFE is from increased force on the hip at a time when the femoral head is not quite ready to support these forces. The femoral head fails at the weakest point, through the epiphyseal plate. As a result, a condition similar to a stress fracture develops. 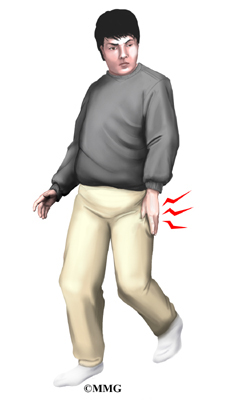 Most teenagers with SCFE develop pain in the hip, and they begin to walk with a limp. When the doctor examines the hip, the motion of the hip is abnormal and restricted. Because the anatomy of the hip joint is altered, patients usually walk with the foot and leg turned out on the affected side.

Interestingly, problems in the hip sometimes do not cause pain in the hip itself. The knee is where the pain is felt. This can be confusing both to patients and physicians. In general, a teenager with knee pain and who has no clear-cut reason to have knee pain should be examined for possible SCFE. This usually includes X-rays of the hips to make sure that SCFE is not missed.

The main problem with SCFE is that it changes the structure of the hip joint. How much it affects the way the hip joint works depends on how much the epiphysis slips. The more the slip, the more likely there will be problems later in life. 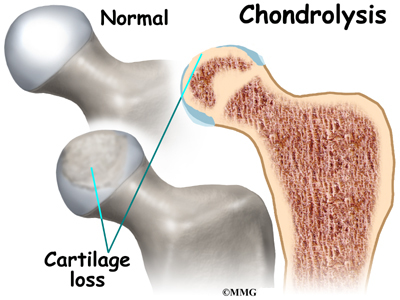 There are two complications of SCFE that may occur immediately after the condition develops. One complication is chondrolysis, a condition where the articular cartilage of the hip joint is destroyed. Articular cartilage is the smooth material that covers the joint surface. It is unclear why this develops. It may occur with or without surgery. This condition results in narrowing of the joint space and a painful, stiff hip. 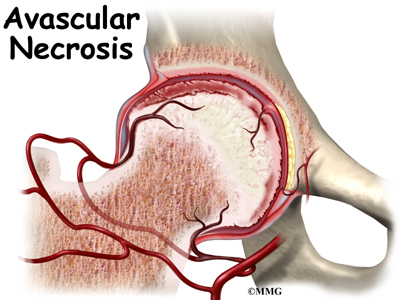 The other possible complication is called avascular necrosis of the capital femoral epiphysis. This usually occurs when the blood vessels that provide blood to the epiphysis are damaged, torn, or pinched. This can happen when the SCFE develops very rapidly and presents like a true fracture. This can also occur when attempting to reduce, or align, the two parts of the femoral head before inserting a screw. The result is that the epiphysis dies and the bone collapses causing further deformity. This can lead to early arthritis in the hip joint.

The history and physical examination are usually enough to make the doctor highly suspicious about the diagnosis of SCFE.

X-rays are usually necessary to make the diagnosis in SCFE. Based on X-ray findings of the lateral head-to-shaft angle, the slip can be graded. Grades are defined as mild (less than 30 degrees), moderate (30 to 50 degrees), or severe (more than 50 degrees). In the past, SCFE was classified as acute or chronic. The terms stable or unstable are used now because this status is a better predictor of osteonecrosis.

Treatment of SCFE usually requires surgery. If surgery is absolutely not possible for other reasons, then placing the child in a type of body cast called a hip spica may be an option. This is not as successful as surgery and is not the preferred choice.

The primary goal of the treatment of SCFE is to stop any further slippage of the capital femoral epiphysis. The less slip, the lower the risk of problems in the hip during the child’s life.

Once the epiphysis has closed, slippage will stop. Epiphysis closure occurs when the two areas of bone–the epiphysis and metaphysis–join, or fuse, into one single bone. At that point there is no cartilage growth plate remaining between the two parts of the femur. Surgery usually speeds up the process of epiphysis closure.

Once the diagnosis of SCFE is made, surgery is usually suggested immediately. The surgery is scheduled within a few days following the diagnosis. Until the surgery can be performed, it is highly advisable to use crutches and restrict activities to a minimum. The surgery can usually be done as an outpatient. General anesthesia (where the patient is put completely to sleep) is usually recommended, unless there are reasons not to use a general anesthetic. If so, a spinal block may be used instead.

Other types of surgery have been used in the past. For many years surgeons thought it necessary to use two or three screws to hold the epiphysis. This has been shown to be unnecessary in most cases. Using additional screws may actually increase the risk of complications. Open operations using much larger incisions have also been used in the past. These procedures have been abandoned because using a single screw works better and is easier to do. 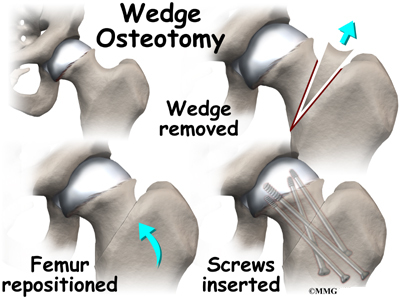 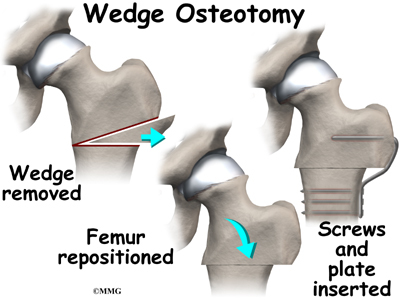 If there is a serious structural change in the anatomy of the hip, there may need to be further surgery to restore the alignment closer to normal. This procedure is usually not considered until the child is done growing. As a child grows, there will be some remodeling that occurs in the hip joint. This may improve the situation such that further surgery is unnecessary.

In the case of unilateral (one-sided) SCFE, experts also recommend pinning the normal hip. This is called prophylactic pinning. The child with moderate to severe unilateral SCFE is at risk for slippage to occur on the other side.

Prophylactic treatment is easy to do and can be done at the time of the operation on the involved side. Taking this step reduces the need for repeated X-rays to check the normal side for any sign of SCFE. The child can remain more active without constant worry that the hip will slip. The complications of chondrolysis, avascular necrosis, and/or degenerative arthritis can also be avoided.

Crutches are required following surgery for SCFE. Within three to five days, most patients will be able to start putting some weight down while standing or walking. Over the next few weeks and as pain subsides, the crutches may be discarded. Physicians differ in their postoperative regimen, so make sure you are clear on what your surgeon recommends, especially how long crutches are needed.

The surgeon will take X-rays during the follow up visits to make sure that the screw remains in the right place. The X-rays are also required to determine when the epiphyseal plate fuses. At that point, there won’t be any chance that the slip will get worse. When this is known, the follow up visits will be focused on whether the abnormality is likely to need any additional surgery to realign the hip.

Opinions differ on the need to remove the screw once the epiphysis has fused. Removing the screw requires a second surgery that can be expensive and carries a slight risk due to the need for anesthesia. The hole left when the screw is removed also increases the risk of fracture after the screw is taken out. If the screw is removed, the surgeon may recommend crutches for three to six weeks afterward. Many surgeons feel that the screw should be left in place if it isn’t causing problems.