A Patient’s Guide to Shin Splints 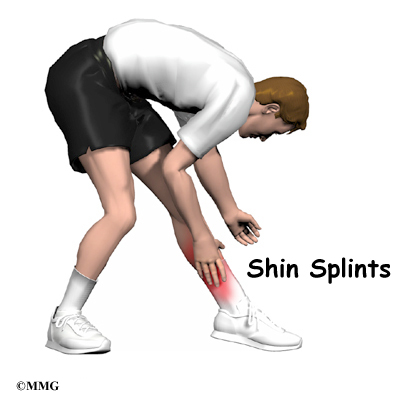 Pain along the front or inside edge of the shinbone (tibia) is commonly referred to as shin splints. The problem is common in athletes who run and jump. It is usually caused by doing too much, too quickly. The runner with this condition typically reports a recent change in training, such as increasing the usual pace, adding distance, or changing running surfaces. People who haven’t run for awhile are especially prone to shin splints after they first get started, especially when they run downhill. Shin splints on the front of the tibia are called anterior shin splints. Posterior shin splints cause pain along the inside edge of the lower leg.

What parts of the leg are involved?

The lower leg is made up of two bones. The shinbone is the larger of the two bones. It is called the tibia. The small, thin bone that runs alongside the tibia from the knee to the ankle is the fibula. 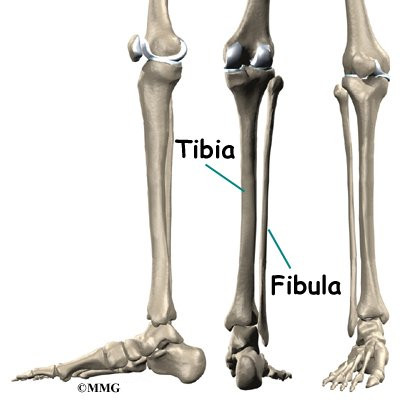 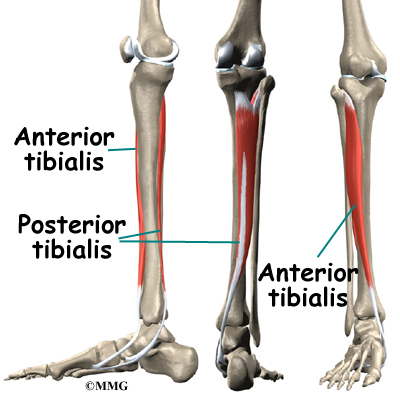 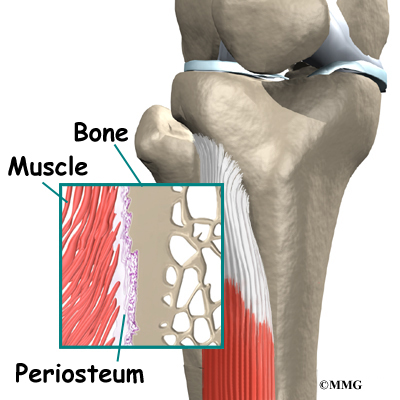 The tibialis muscles have tiny fibers that fasten the muscle to the bony surface of the tibia. This bony covering, or membrane, is called the periosteum (peri means around, and osteum means bone).

Why do I have shin splints?

Shin splints usually result from overuse. Repeated movements of the foot can cause damage where the tibialis muscles attach to the tibia. Soon the edge of the muscles may begin to pull away from the bone. The injured muscle and the bone covering (the periosteum) become inflamed.

Overuse commonly happens after changes in training. Increasing running speed and distance and running on hard or angled surfaces can contribute to overuse. Overuse can also occur from running in flimsy footwear or in shoes with soles that are worn out.

Anterior shin splints tend to affect people who take up a new activity, such as jogging, sprinting, or playing sports that require quick starts and stops. The unfamiliar forces place a heavy strain on the anterior tibialis muscle, causing it to become irritated and inflamed. This commonly happens when people who aren’t regular runners decide to go on a long jog. The anterior tibialis muscle must work hard to control the landing of the forefoot with each stride. Running downhill puts even more demands on this muscle in order to keep the forefoot from slapping down. People who run on the balls of their feet or who run in shoes with poor shock absorption also tend to get anterior shin splints. 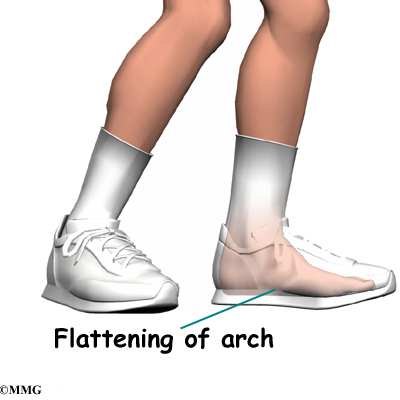 Posterior shin splints are generally caused by imbalances in the leg and foot. Muscle imbalances from tight calf muscles can cause this condition. Imbalances in foot alignment, such as having flat arches (called pronation), can also cause posterior shin splints. As the foot flattens out with each step, the posterior tibialis muscle gets stretched, causing it to repeatedly tug on its attachment to the tibia. The posterior tibialis muscle attachment eventually becomes damaged, leading to pain and inflammation along the inside edge of the lower leg. 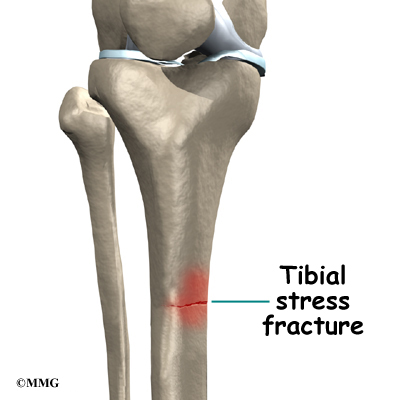 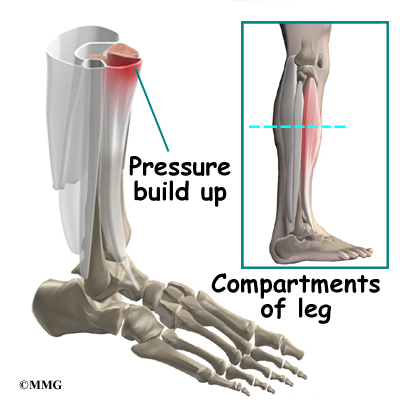 If the continues to rise, it can squeeze the larger blood vessels and nerves as well. Patients may feel coldness, numbness, and swelling in the lower leg and foot. If pressure builds up and is not treated, it can cause serious tissue damage in the leg and foot.

Anterior shin splints are usually felt on the front of the tibia, especially when using the anterior tibialis muscle to bend your foot upward.

Posterior shin splints produce symptoms along the inside edge of the lower leg. Small bumps may also be felt along the edge of the tibia in this area.

Symptoms of shin splints generally get worse with activity and ease with rest. Pain may be worse when you first get up after sleeping. The sore tibialis muscle shortens while you rest, and it stretches painfully when you put weight on your foot.

How will my doctor know if I have shin splints?

The diagnosis of shin splints is usually made using your history and physical examination. The doctor may ask you questions about your training schedule and footwear. The doctor may also want to know whether you’ve recently begun a new sport that requires running or jumping.

The physical examination lets the doctor see exactly where your leg hurts. The doctor will probably move your ankle in different positions and have you hold your foot against the doctor’s pressure. By stretching the tibialis muscles and by feeling where these muscles attach on the tibia, the doctor can begin to tell where the problem is.

X-rays may be ordered to make sure you don’t have a stress fracture. However, recent stress injuries may not show up on X-ray for the first few weeks. In these cases, a bone scan may be ordered. A bone scan involves injecting tracers into your blood stream. The tracers then show up on special X-rays of your leg. The tracers build up in areas of extra stress to bone tissue. The extra stress can be caused by a stress fracture or an inflamed periosteum (bony covering). This condition is called periostitis.

Your doctor may also order a magnetic resonance imaging (MRI) scan. An MRI scan is a special imaging test that uses magnetic waves to create pictures of your body in slices. The MRI scan shows tendons as well as bones. It also shows abnormal swelling or scar tissue. An MRI is painless and requires no needles or injections.

A test for measuring pressure in the sore leg may be needed if you have symptoms of compartment syndrome. Pressures within the tissues of the leg are checked before and after exercise to see if exercise causes the pressure readings to go up.

How are shin splints treated?

Most cases of shin splints respond to nonsurgical treatments. Rest plays a key role in decreasing pain and inflammation. Patients are usually encouraged to stop doing the activity that caused the problem, at least until their symptoms are under control. Applying cold packs and taking anti-inflammatory medications calm pain and inflammation and are useful in the early stages of treatment.

Special taping techniques may be used to support the sore tissues and ease pain. However, taping should be used to help the area heal, not as a way to keep on training.

Patients may be encouraged to purchase a pair of shock-absorbing shoe insoles. People with flat arches may need shoe inserts, called orthotics, to support the arch.

Doctors may have their patients work with a physical therapist. Therapists apply treatments to reduce pain and inflammation. Whenever possible, the underlying problems causing the shin splints are also addressed. The therapist may offer ideas to avoid overuse while training, evaluate your running style, and suggest tips on footwear. Treating the main cause will normally help get rid of shin splints.

In rare instances, an injection of cortisone along the edge of the muscular connection to the bone may be used. However, cortisone is used very sparingly because it can weaken the soft tissues of the tibialis muscles.

Surgery is rarely needed to correct problems of shin splints. However, shin splints that are complicated by compartment syndrome may require surgery, sometimes immediately. 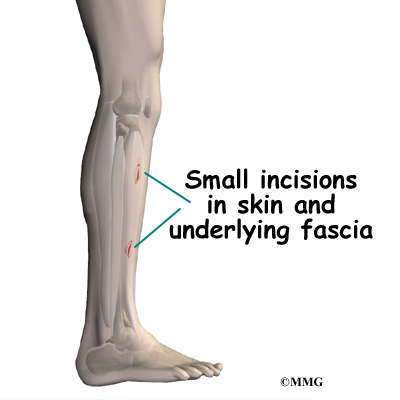 If compartment syndrome is discovered and diagnostic tests show high pressures within the tissues of the lower leg, surgery may be recommended right away. The procedure to remove the pressure is called fasciotomy. Fascia is the connective tissue around and between muscles and organs. The surgeon makes a few small incisions on either side of the lower leg. The nearby layer of fascia within several compartments is cut and removed to reduce the pressure within the compartment. The incisions are left open at first. Tissue pressures are checked over a period of two to three days. The wounds are then closed.

If the problem has been present for more than three months, the surgeon may only need to make one or two incisions to cut the layer of fascia and reduce pressure inside a single problem compartment.

When can I get back to my usual activities?

You will need to hold off heavy training and sports activity for three to four weeks. As the pain starts to go away, it should be safe to begin doing more normal activities.

Your doctor may prescribe a carefully progressed physical therapy program lasting four to six weeks. At first, treatments are used to calm inflammation. Iontophoresis uses a mild electrical current to push a topical steroid medicine into the sore area. Ultrasound treatments, often used in combination with a topical steroid medicine, are also effective in halting pain and inflammation. Your therapist may show you how to ice, rest, and tape the injured area.

Deep tissue massage is commonly done along the junction where the sore tibialis muscle meets the tibia. Afterward, the calf and tibialis muscles are gently stretched.

Your therapist will evaluate your posture and alignment to see if you have problems with pronation (arch flattening). This condition tends to be more common with posterior shin splints. Sometimes a small heel wedge placed under the inside edge of the heel is enough to ease tension on the posterior tibialis muscle. More severe problems of pronation may require foot orthotics to support the arch and reduce stresses on the posterior tibialis muscle.

Therapists work with athletes to avoid overuse problems. Knowing your training schedule, pace, and the surface you use will guide your therapist in making recommendations. Alterations are suggested when needed, especially as you attempt to safely resume your sport. Recommendations may be offered regarding footwear and the use of shock-absorbing insoles.

If surgery is required, the rehabilitation is a bit different at first. A protective dressing covers the incisions. You may need to use crutches for several days after surgery, but you should be able to bear weight on the foot within the first week. Your stitches will be removed in 10 to 14 days (unless they are absorbable stitches, which will not need to be taken out).

Athletes work gradually back to activity. They start by using a stationary bike within 10 to 14 days. It is usually safe to begin a light jogging program within six weeks. Most patients can safely begin full activity within eight to 10 weeks.