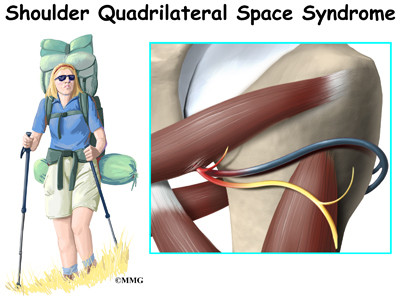 Quadrilateral space syndrome (QSS) happens when the axillary nerve is compressed, or injured in the back of the shoulder. Sometimes the symptoms are caused by the compression of an artery in the same area.

Quadrilateral space syndrome usually happens from overuse, especially with overhead sports like throwing and swimming. The syndrome can also be caused by an injury, like a shoulder dislocation.

What parts of the shoulder are involved? 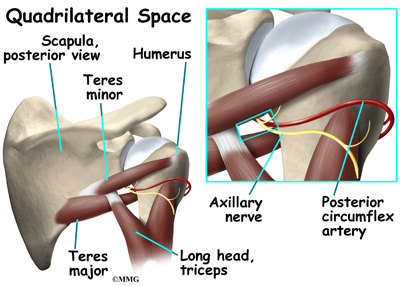 In addition to these muscles, the axillary nerve and the posterior circumflex humeral artery are in the quadrilateral space. When either the nerve or the artery is compressed or injured in this area it can cause problems such as quadrilateral space syndrome. 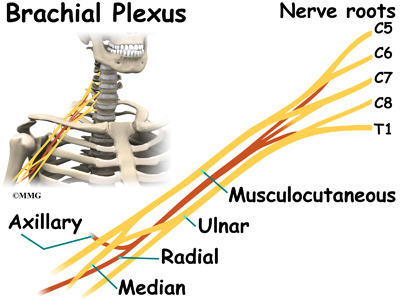 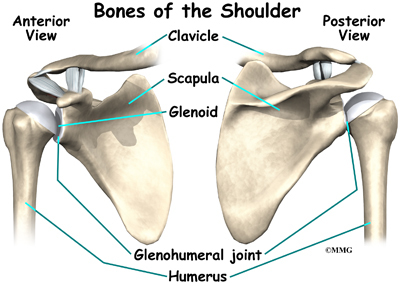 The shoulder joint is supported by many muscles. The most famous are the four rotator cuff muscles.They combine at the shoulder to form a thick cuff. They are also referred to as the SITS muscles. Each letter stands for one 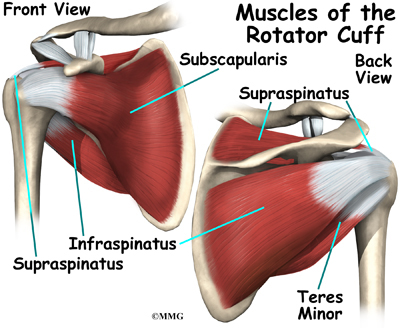 of the rotator cuff muscles; supraspinatus, infraspinatus, teres minor, and subscapularis. Sometimes injury to the quadrilateral space is mistaken as rotator cuff injury. 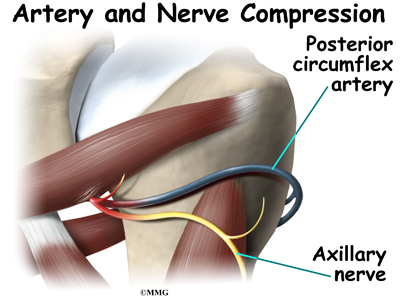 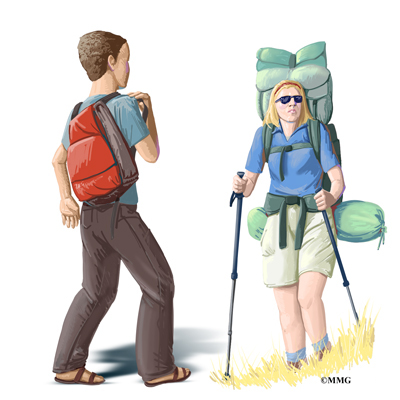 An acute axillary nerve injury can also happen from carrying a heavy backpack. The misuse of crutches can also cause compression of the nerve. 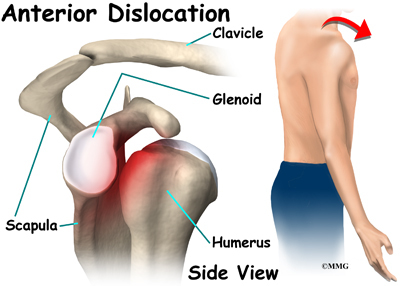 A blunt force injury to the back of the shoulder can also cause quadrilateral space syndrome. 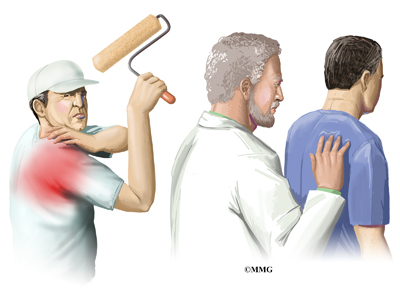 Weakness and instability can sometimes be noted. The diagnosis of quadrilateral space syndrome is often missed since symptoms can be similar to other shoulder problems.

Your doctor will complete a history and physical examination.

Your doctor will ask questions about activity, possible traumatic injury, and the symptoms you are having. The physical examination usually includes evaluating range of motion, strength testing, checking reflexes and sensation. During this examination pressure will be applied over various areas of the shoulder to see where it may be painful.

Weakness and instability can sometimes be noted. The diagnosis of quadrilateral space syndrome is often missed since symptoms can be similar to other shoulder problems. Often there will be wasting of the teres minor muscle, and sometimes the deltoid muscle. Subluxation (instability) of the glenohumeral joint is sometimes noted as well.

Your doctor may want you to have some special tests done in order to better evaluate what is causing your problems.

Electromyelogram (EMG) is a valuable tool in the diagnosis of quadrilateral space syndrome (QSS) and other peripheral injuries around the shoulder. The doctor will place small needle electrodes into various muscles to see how well they are functioning. Since different nerves make different muscles work, it help to narrow down where the problem is coming from.

Magnetic resonance imaging (MRI) scans can sometimes identify the muscle wasting of the teres minor and deltoid muscles. MRI does not use x-rays. It uses magnetic waves. It allows the doctor to see your tissues and bones in thin slices.

Most of the time, quadrilateral space syndrome will improve with nonsurgical treatment.

It is important to rest your shoulder. Your doctor may suggest taking a break from the activity that may be causing your symptoms. Changing throwing or sport mechanics may be helpful.

Anti-inflammatories (NSAIDs) such as ibuprofen or naprosyn may be suggested. Heat or cold packs to your shoulder may be beneficial.

If there is no improvement after six weeks of conservative care, surgery is usually recommended.

Bands of extra fibers in the quadrilateral space are usually what cause the compression of the axillary nerve or the small artery or vein. These bands of fibers are clipped or removed during surgery. This type of surgery is called decompression. It is quite effective. 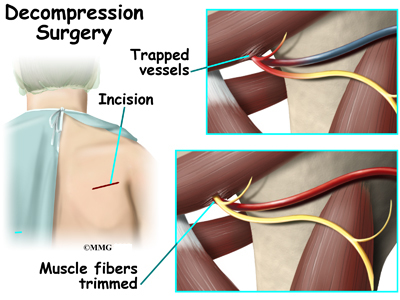 Occasionally, after high-energy trauma, or during surgery, the axillary nerve will be over-stretched, or even cut. This type of injury is called neurotomesis. The axillary nerve may need to be repaired. The injured portion is replaced with another nerve. This is called a nerve graft. 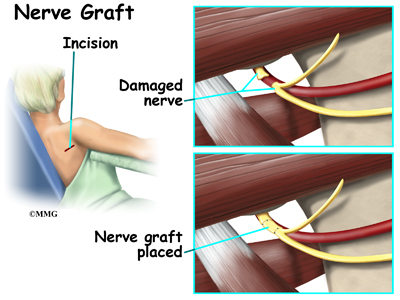 Your surgeon will operate from the back of the shoulder, making a small incision. In the case of nerve grafting, there will be a small incision where the other portion of nerve is removed. You will be allowed to go home the same day. Your arm will likely be in a sling.

Physical therapy is helpful for maintaining shoulder range of motion, or flexibility. Posture training may also be helpful. Your physical therapist or trainer may have you change the way you do your overhead sport when overuse is a problem. Electrical muscle stimulation (EMS) may be beneficial when there is muscle weakness or wasting. EMS is a battery operated device that sends electrical current to your muscles to make them contract. This will help maintain strength and decrease wasting of the muscle. There are units that can be used at home.

After about four weeks, you may be able to do more exercise on your own. Usually by six weeks, exercises specific to your sport are introduced. In most cases, you can expect to be pain free, have full range of motion, and be able to resume activity in 12 weeks.

Return to sports varies. Your doctor may want to have the EMG repeated monthly to see if the axillary nerve is improving. Improvement in the EMG should be seen. Near full recovery of deltoid muscle strength is recommended before return to your sport.
Most of the time, conservative care such as physical therapy is all that is needed. Return to activity is the goal of treatment. Rarely is surgery needed.

Phase I is to limit pain, and allow range of motion at the shoulder. Gentle motion is started to keep scar tissue from forming again. This also keeps the nerve and blood vessels moving freely. During the first four weeks after surgery, it is important not to overuse your arm. Working on posture may also be a part of your therapy.

Phase III is usually started six weeks after surgery. This includes sport specific activities, functional activities, and continued conditioning. Your physical therapist or trainer may have you change the way you do your overhead sport when overuse has been the problem.

Your doctor may want to have the EMG repeated at monthly intervals to see if the axillary nerve is improving, especially after surgery to graft the nerve. By twelve weeks, you should be pain free. You should have full range of motion of the shoulder. Return to sports varies. However, in general, it is recommended there be improvement in the EMG, and that the muscle strength of the operated shoulder is at least 80 percent of the muscle strength of nonoperated shoulder.