A Patient’s Guide to Psoriatic Arthritis 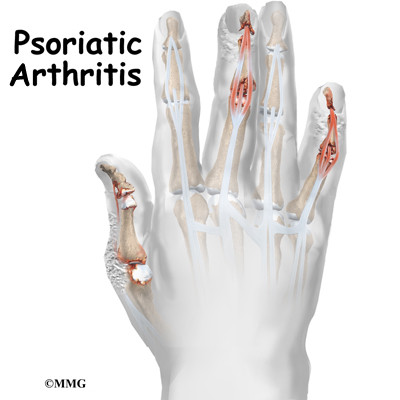 Psoriasis is a disease that most people think of as primarily a skin disease because the condition causes a persistent rash in various areas of the body. Psoriatic arthritis is a type of joint disease that occurs in roughly seven percent of people who have psoriasis. Psoriatic arthritis affects people of all ages, but most get it between the ages of 30 and 50. Usually a patient has psoriasis (the skin rash) for many years before the arthritis develops, and the arthritis comes on slowly. But this is not always the case. No matter what, patients with psoriatic arthritis must manage both the outbreaks of itchy, scaly skin and the pain and stiffness of arthritis.

Where does psoriatic arthritis develop? 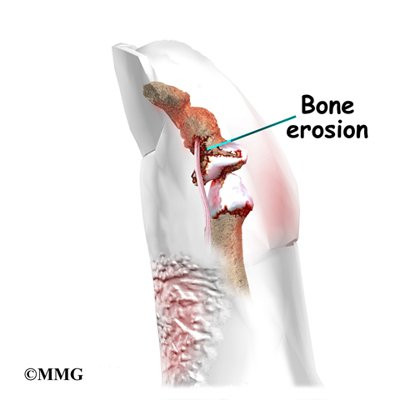 Patients with psoriatic arthritis fall into three groups. Many patients have what is called asymmetric arthritis. This means that only a few joints are involved and that it does not occur in the same joints on both sides of the body. (For example, only one wrist and one foot are affected.)

An equal number of patients suffer from symmetric polyarthritis. This means that arthritis occurs in several corresponding joints on both sides of the body. (For example, both elbows, both knees, and both hands are affected.) The polyarthritis type of psoriatic arthritis is much like RA.

A third group has mostly axial disease. This refers to arthritis of the spine, the sacroiliac joint (where the pelvis and bottom of the spine meet), or the hip and shoulder joints. Patients do not necessarily stay in the same category. Over time, the pattern may change. Doctors use these categories to better understand the disease and to follow the progression of the arthritis. The treatment is basically the same.

The exact cause of psoriatic arthritis is not known. Many factors seem to be involved in its development. Heredity–your genes–plays a major role. People who are closely related to someone with psoriatic arthritis are 50 times more likely to develop the disease themselves. Recent studies have located genetic markers shared by most people who have the disease.

Sometimes injuries seem to set off psoriatic arthritis. Infections also contribute to the disease. It is known that strep infections in children can cause psoriasis. Some researchers think that the arthritis may be an immune system response to bacteria from the skin lesions.

All people who suffer from psoriatic arthritis have psoriasis (the skin rash). Some patients have very few areas of rash. Other patients have psoriasis over a large portion of their bodies. The skin lesions of psoriasis are reddish, itchy, and have silvery scales. These areas can range in size from the size of a pencil dot to the large areas the size of your palm. Psoriasis usually shows up on the elbows, knees, scalp, ears, and abdomen, but it can appear anywhere. In people with psoriatic arthritis, the psoriasis most often affects fingernails or toenails. The nails may have pits or ridges, or they may be discolored or appear to be separating from the skin.

Psoriatic arthritis can affect any joint. Symptoms often seem like those of any other type of arthritis–joint swelling and pain–but patients generally describe less pain. Some joint symptoms are unique to psoriatic arthritis: 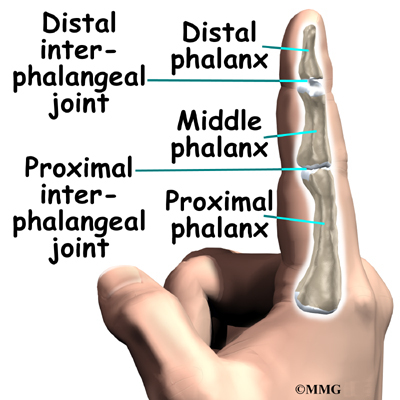 Rare symptoms include problems with the aortic heart valve, extra tissue formation in the lungs, and metabolic disorders that affect the tissues.

A detailed medical history, with questions about psoriasis in your family, will help your doctor make a diagnosis. Patients with psoriasis may have other forms of arthritis, and the symptoms of psoriatic arthritis often look like other types of joint disease. This means that your doctor will probably do tests to rule out other diseases.

Blood studies will help rule out RA. (The RA test is usually not positive in patients with psoriatic arthritis.) Efforts are being made to find ways to identify psoriatic arthritis through a blood test. The presence of specific biologic elements called biomarkers (biologic evidence of disease) would make it possible to look for evidence of this disease before it progresses – or even before it starts. Psoriatic arthritis is common in people who test positive for HIV, the AIDS virus. As a precaution, your doctor may test your blood for HIV, especially if your symptoms are severe.

Physicians must also use other diagnostic tools such as X-rays, ultrasonography, and MRIs. Each one of these tests provides a little different information. For example, X-rays of affected joints will be studied both to rule out other diseases and to identify characteristics of psoriatic arthritis.

Ultrasonography, the use of sound waves to create a picture of what’s going on inside, provides a better look at the whole package: bones, joints, and soft tissues. This diagnostic test is also noninvasive and does not expose the patient to any radiation. Ultrasound also has the ability to show small changes in the nails and early signs of inflammation in tendons and small joints.

MRIs can show bone marrow edema, tenosynovitis, and early joint erosion. Tenosynovitis is the inflammation of the fluid-filled sheath (called the synovium) that surrounds a tendon. But reliability is a problem with MRIs because what one examiner sees may not be the same as another observer. Changes in the small joints of the hands and feet don’t show up well on MRIs like they do with ultrasonography.

One advantage MRIs do have over ultrasonography is the availability of whole body MRI. By scanning the entire body, it is possible to identify areas of inflammation undetected by clinical exam.

Until blood studies are able to find biomarkers indicating the presence of psoriatic arthritis, physicians will probably have to use a combination of different tests to diagnose the problem. The information these tests provide is important in determining treatment.</p.

Dealing with psoriatic arthritis involves treating both the skin lesions and the joint pain. Many lotions and creams are made for skin affected by psoriasis. If the skin involvement is especially severe, your doctor will most likely prescribe a drug called methotrexate. Methotrexate can also help with the arthritis.

PUVA therapy may be helpful for both the skin and joint problems. PUVA therapy uses topical cream medications that are rubbed on the skin lesions. Following application of the cream, the skin area is placed under a lamp that emits a special ultraviolet light. The light triggers chemicals in the medication cream that treat the rash lesions.

Treatment of arthritis symptoms depends on which joints are affected and the severity of the disease.

The first drugs most doctors prescribe are nonsteroidal anti-inflammatory drugs (NSAIDs). Aspirin and ibuprofen are NSAIDs, as are many prescription pain relievers. Other medications known as disease-modifying antirheumatic drugs (DMARDs) are used in patients with high levels of pain or especially bad arthritis. These medications work in different ways to regulate the immune system and thereby control the arthritis.

One of the most commonly used disease-modifying medication for the treatment of psoriatic arthritis (PsA) is methotrexate. DMARDs like methotrexate not only control symptoms, they also slow the progression of disease. That’s what makes them “disease-modifying”. For some patients, it may be necessary to combine methotrexate with another drug (e.g., infliximab) to get the desired results (decreased joint pain, swelling, and stiffness).

Oral medications (pills taken by mouth) are under investigation that might be available in the future for the treatment psoriatic arthritis (PsA). These include ustekinumab, apremilast, and tofacitinib. Each of these medications works in a slightly different way to regulate the immune system.

Doctors will sometimes prescribe a combination of drugs. Cortisone injections into sore joints can help relieve pain. Surgery may be called for in the rare cases of unmanageable pain or loss of joint function.

Related Document: A Patient’s Guide to Medications for Arthritis

Warm water soaks and applying heat to joints gives pain relief to many patients. Your doctor may ask you to see a physical therapist to maximize the strength and mobility of your joints. Stress does make your symptoms worse, so your doctor may encourage you to exercise and find ways to reduce the stress of your daily life.

Your psoriatic arthritis will not go away. But there are many treatment options. Together, you and your doctor should be able to find treatment that will work for you.