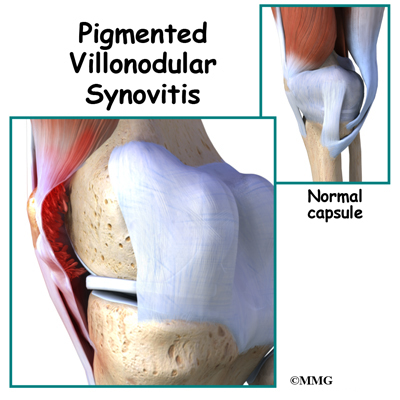 Eighty per cent of the time pigmented villonodular synovitis affects just one joint of the body, primarily the knee joint. The hip, shoulder, and the smaller joints in the hands and feet can also be affected.

Pigmented villonodular synovitis occurs in less than two persons per million per year. It occurs in both men and women commonly between the ages of 20 and 45 years.

What parts of the knee are affected? 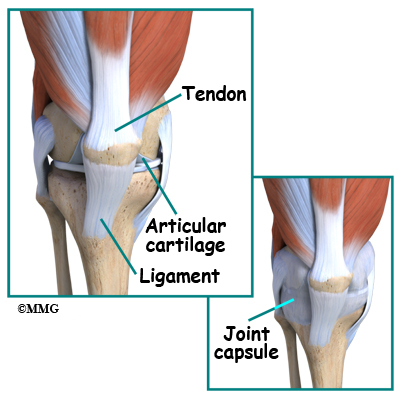 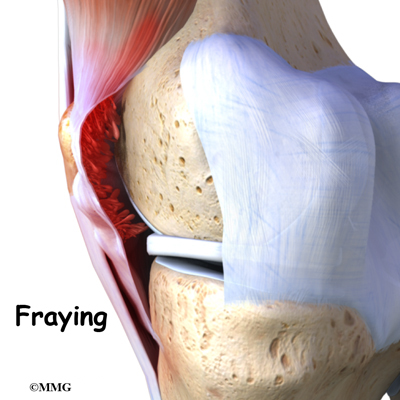 Villous means hair-like. In pigmented villonodular synovitis, the tissue that is affected may look frayed or hair-like. The synovial tissue can also appear folded. Sometimes the tissue will have round bumps or nodules. The nodular type is usually seen in tendons. Tissue affected by pigmented villonodular synovitis can contain deposits of fat. Pigmented means colored. The synovium and its fluid is often a brown color instead of clear. This is because blood, which contains iron, is deposited in the fluid.

Pigmented Villonodular Synovitis (PVNS) at one time was thought to be a form of malignant cancer. It is now considered a benign, or non-cancerous, inflammatory process.

It is not known if PVNS is due to injury. Patients have reported injury at some time to the affected joint, others do not. There does not seem to be a genetic cause. It happens in both men and women generally between the ages of 20 and 45 years. It occurs in less than two persons per million per year.

The exact cause is unknown. Some doctors believe it’s caused by abnormal metabolism of fat. Others think it may be caused by repetitive inflammation. Some feel that blood within the joint may cause the inflammatory change.

What are the symptoms?

Symptoms of pigmented villonodular synovitis (PVNS) of the knee include inflammation, swelling, stiffness, and tenderness around the joint. The pain can come and go.

Symptoms may feel like arthritis. The pain comes on slowly in the joint. There may be swelling, tenderness, and limited movement of the knee. The symptoms can come and go. Eighty per cent of the time PVNS affects the knee.
Sometimes a popping feeling is felt in the knee. Tenderness in the front part of the knee near the knee cap is usually noticed. The symptoms are rather “non-specific”, meaning that they can act like other problems. PVNS of the knee can easily be mistaken for a torn meniscus, or problems with the patella (knee cap).
There are two types of pigmented villonodular synovitis (PVNS). When it occurs in one large synovial joint of the body, such as the knee, it is considered diffuse. This is because the inflammation is more widespread within the joint. The synovial capsule, bursa, and tendon sheaths around the joint can all be involved. Even the bones in the knee joint can be affected.

The other type of pigmented villonodular synovitis is localized, or focal. This form is rare. It usually affects just the tendon sheaths around smaller joints in the hands and feet. This means there will be localized swelling and likely some tenderness along the tendons.

Your doctor will want to do a physical examination. He/she will want to measure range of motion of the knee joint. Your doctor will also want to determine if there is any swelling, nodules, tenderness, or fluid in the joint. Swelling in your knee may feel warm and be somewhat tender to palpation.

Imaging plays an important role in the diagnosis of pigmented villonodular synovitis (PVNS). Often, X-rays will be normal. Sometimes there will be cysts in the bone at the joint caused by the invasion of PVNS. There are usually no wear and tear changes like with arthritis.

MRI does not use x-rays.  It uses magnetic waves. It allows the doctor to
see your tissues and bones in thin slices. You will need an MRI with
contrast. This means that you will have to have an IV inserted. The contrast
material is called gladolinium. The gladolinium will go where cells are more
active in your body. Cells tend to be more active in areas where there is
inflammation, and in tumors.

If PVNS has invaded the bone, your doctor will likely want you to have a computed tomography (CT) scan. This is a special form of xray. Like the MRI, it takes pictures in slices. This will require the injection of intravenous contrast so that tissues can be better evaluated.

Your doctor may want to remove (aspirate) fluid from the joint that is affected. This is called arthrocentesis. The fluid is taken out with a needle. The fluid is then tested in the lab. If PVNS is the cause of the symptoms, most of the time the fluid will contain blood.

A biopsy of the affected tissue may be suggested. This can certainly confirm the diagnosis of PVNS. Computed tomography is used to perform the biopsy. Pictures are taken while your doctor is placing the needle in the tissue to be removed and tested. The tissue that is removed is then looked at in the lab. If pigmented villonodular synovitis (PVNS) is present, the synovium will be thickened. It will likely have both villous and nodular extra growth. Inflammation cells called giant cells are usually present. The synovium and fluid will be a brown color. This is due to deposits of iron in the blood.

There is no nonsurgical treatment. Because the PVNS can grow and invade bone, surgery is the recommended treatment.

Since PVNS can invade the joint, the most effective treatment is surgery. Removing the synovium and involved tissue is necessary. Since PVNS can grow back, sometimes radiation is recommended. Sometimes joint replacement may be needed. 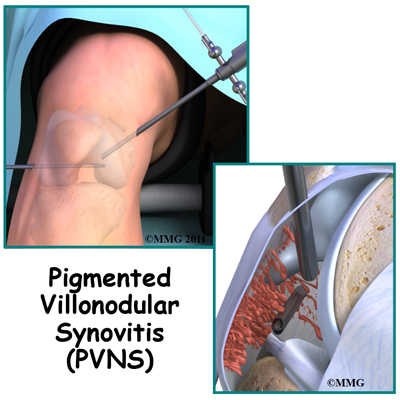 The recommended treatment for PVNS is removal of all the affected tissue. The surgery is called a synovectomy. Most of the time this surgery can be done with an arthroscope. Your surgeon makes tiny cuts in the skin over your joint. A thin tube with a tiny camera is used so your surgeon can see inside the joint. Instruments for cutting, smoothing, and removing tissue are passed through another thin tube. Arthroscopy is done as a “same day” surgery, meaning you can go home the same day.

Sometimes the synovectomy is done by opening the knee joint. In diffuse pigmented villonodular synovitis (PVNS), all the tissue, including any bone that seems to be affected is removed. Grafting, or replacing the bone with transplanted bone may be necessary to maintain the joint. In some instances, a total joint replacement of the knee is necessary.

Diffuse PVNS grows back in nearly 50 percent of cases. If your surgeon is concerned that not all of the affected tissue was removed, you may have to have radiation therapy. It is also used if there is recurrence (return) of PVNS after it has been removed.

Radiation therapy is determined by a specialist called a radiation oncologist. A machine that emits radiation waves may be used to treat the affected area. Other times, radiation pellets can be inserted in the area that needs to be treated. This helps to keep the radiation contained, so that it harms as little as possible of the normal tissue.

What should I expect after Treatment?

Rehabilitation usually involves physical therapy. Range-of-motion exercises are important and may be started right away. Strengthening and conditioning exercises will allow you to return to your previous level of activity. When surgery involves the leg, walking with a walker or crutches may be recommended at first.

If knee joint replacement is required, you will likely be hospitalized for three to five days. A continuous passive motion (CPM) machine may be used while in the hospital or started when you return home. Your leg will rest in the machine that is plugged into a wall outlet. The machine slowly bends you knee. This allows range of motion for several minutes or hours at a time. Pain will need to be treated for several weeks. You will need to be careful about keeping your incision clean, and monitor closely for infection.

Use of cold packs will help minimize swelling from surgery for the first several days. You may need pain medication if over the counter anti-inflammatories or acetaminophen (Tylenol®) do not control your pain.

After treatment, your doctor will want you to follow up with him periodically. Repeat MRI is needed to evaluate possible return of the PVNS.