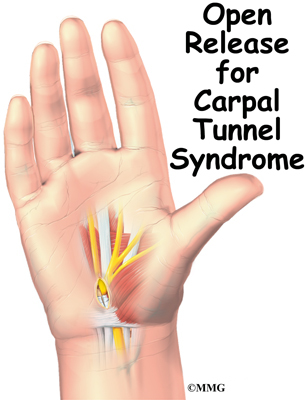 Carpal tunnel syndrome (CTS) occurs when the median nerve is squeezed as it courses through the wrist. The passageway through the wrist, called the carpal tunnel, is formed by the small wrist bones (carpals) on one side and a ligament on the other. In an open release for CTS, the surgeon makes an incision on the front of the wrist and hand in order to cut the ligament. The goal is to relieve pressure on the median nerve. 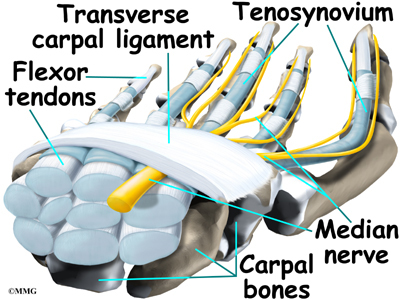 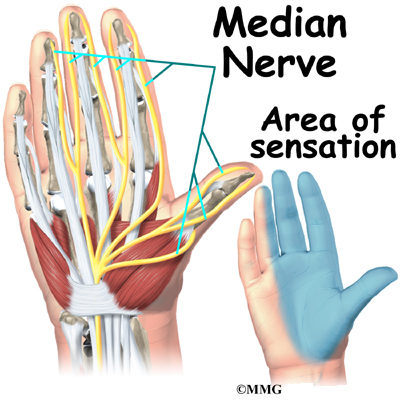 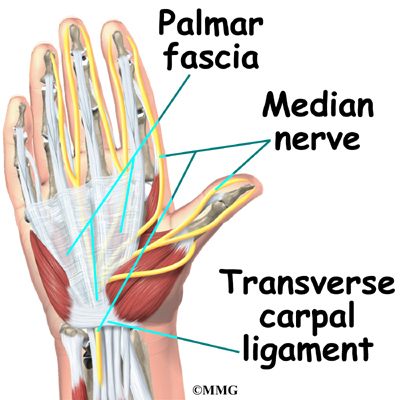 What part of the wrist is treated during surgery?

The opening formed by the carpal bones and the carpal ligament is the carpal tunnel. The median nerve passes through the carpal tunnel into the hand. It gives sensation to the thumb, index finger, long finger, and half of the ring finger. It also sends a nerve branch to control the thenar muscles of the thumb.

What does the surgeon hope to achieve?

The surgery releases the carpal ligament, taking pressure off the median nerve. The open procedure for releasing the carpal ligament involves a sizeable wrist incision, usually about two inches long. By creating a large incision, the surgeon is able to clearly see the wrist structures and to carefully do the operation.

What should I do to prepare for surgery?

The decision to proceed with surgery must be made jointly by you and your surgeon. You need to understand as much about the procedure as possible. If you have concerns or questions, you should talk to your surgeon.

Once you decide on surgery, your surgeon may suggest a complete physical examination by your regular doctor. This exam helps ensure that you are in the best possible condition to undergo the operation.

On the day of your surgery, you will probably be admitted to the hospital early in the morning. You shouldn’t eat or drink anything after midnight the night before. This surgery can usually be done as an outpatient procedure, meaning you can leave the hospital the same day.

Open release for CTS is occasionally done using a general anesthetic (one that puts you to sleep). More often, it is done using a regional anesthetic. A regional anesthetic blocks the nerves going to only a portion of the body. Injections of medications similar to lidocaine are used to block the nerves for several hours. This type of anesthesia could be an axillary block (only the arm is asleep) or a wrist block (only the hand is asleep). The surgery can also be performed by simply injecting lidocaine around the area of the incision.

Once you have anesthesia, your surgeon will make sure the skin of your palm is free of infection by cleaning the skin with a germ-killing solution.

A small incision is made in the palm of the hand, usually about one inch long. In some severe cases, a slightly longer incision is extended into the forearm. The incision makes the palmar fascia visible. This is a sheet of connective tissue in the palm and forearm right under the skin. The surgeon makes an incision through this material and exposes the carpal ligament. 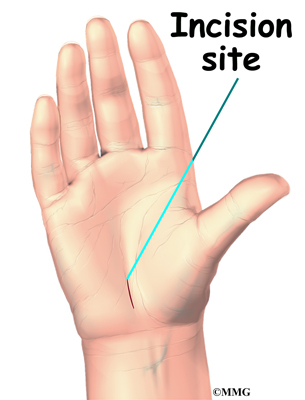 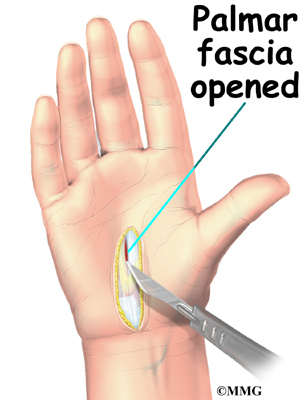 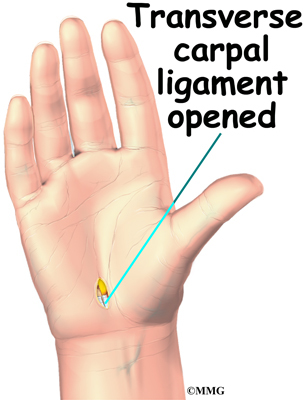 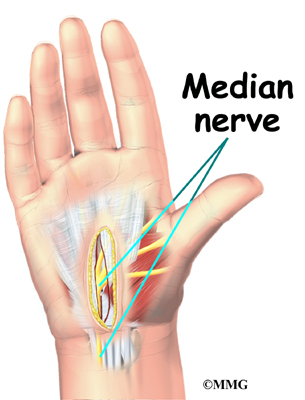 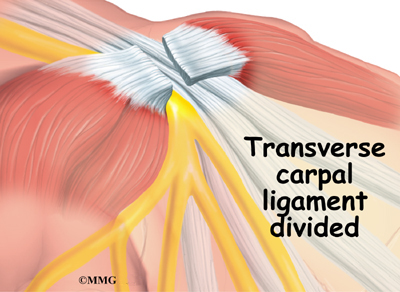 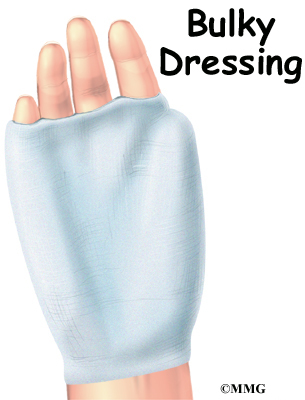 Infection is a possible complication after surgery, especially infection of the incision. Therefore, check your incision every day as instructed by your surgeon. If you think you have a fever take your temperature. If you have signs of infection or other complications, call your surgeon right away.

These are warning signs of infection or other complications:

Some patients continue to have pain along their incision. The area often stays sensitive long after the surgery. However, symptoms of incision sensitivity tend to get better within four to six months after surgery.

A common problem after carpal tunnel release is excessive scar tissue buildup. The body attempts to heal the area but goes too far in the process of supplying new cells. Too much scar tissue forms. When this happens the nearby soft tissues can become bound together. The incision may appear raised. The nearby skin may feel tight. You may even feel a bump beneath the incision. Wrist and hand movement may feel restricted. Scar tissue can also bind the flexor tendons and median nerve, preventing them from gliding smoothly within the carpal tunnel. Pain and a loss of range of motion may occur. In severe cases, a second surgery may be needed to remove the extra scar tissue.

Muscles that are used to squeeze and grip may seem weak after surgery. During normal gripping, the tendons of the wrist press outward against the carpal ligament. This allows the carpal ligament to work like a pulley to improve grip strength. People used to think that the tendons lose this mechanical advantage after the carpal ligament has been released. However, recent studies indicate that hand weakness is more likely from pain or swelling that occurs in the early weeks after the procedure. With the exception of patients who have severe thenar atrophy at the time of surgery, most people achieve normal hand strength within two to four months of surgery. Those with severe atrophy commonly see improvements in hand strength, but they rarely regain normal size of the thenar muscles.

What happens immediately after surgery?

At first, take time during the day to support your healing arm with your hand elevated above the level of your heart. You may be instructed to put an ice pack on your wrist several times a day to keep swelling down. At various times during the day, move your thumb and fingers five to 10 times. Also, bend and straighten your elbow and lift and lower your shoulder occasionally to keep these joints limber. Keep the dressing on your hand until you return to the surgeon. Avoid getting the stitches wet. Your stitches will be removed 10 to 14 days after surgery.

It generally takes longer to recover after open carpal tunnel release. Pain and symptoms usually begin to improve, but you may have tenderness in the area of the incision for several months after surgery.

Patients who wait too long to seek medical advice sometimes have difficulty adjusting after surgery. Poor coping skills in the presence of persistent pain and numbness may result in disappointment or dissatisfaction with the results of surgery. Recovery may take longer than expected when nerve damage is severe. In some cases, symptoms are not entirely alleviated.

What should I expect after surgery?

Many surgeons prefer to have their patients attend occupational or physical therapy sessions after the stitches are removed. Patients are treated two to three times each week for four to six weeks. As mentioned, however, it may take several months for the incision pain to go away and for maximum hand strength to return.

At first, therapists attempt to reduce pain and swelling. Common treatments include hot or cold packs, electrical stimulation, and ultrasound. Massage strokes directed from the fingers toward the elbow help move swelling away from the hand and wrist.

Therapists use hands-on stretching and active hand and wrist exercises to encourage range of motion. You’ll be shown how to carefully strengthen your hand by squeezing and stretching special putty. You’ll likely be given home exercises to improve hand and finger movement and strength.

As you progress, your therapist will also give you exercises to help strengthen and stabilize the muscles and joints in the hand. Other exercises are used to improve fine motor control and dexterity. Some of the exercises you’ll do are designed to get your hand working in ways that are similar to your work tasks and sport activities.