A Patient’s Guide to Nursemaid’s Elbow 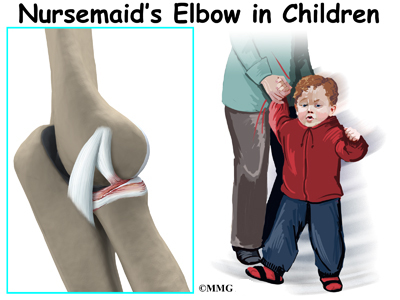 Nursemaid’s elbow is a common injury in young children. It occurs most often around age two and rarely seen after age eight. Lifting the child up a step by the hand, giving the hand a sudden jerk, or pulling the child away from a dangerous situation can result in a subluxation or complete dislocation. This condition is also known as pulled elbow or radial head dislocation.

What part of the elbow does this problem affect? 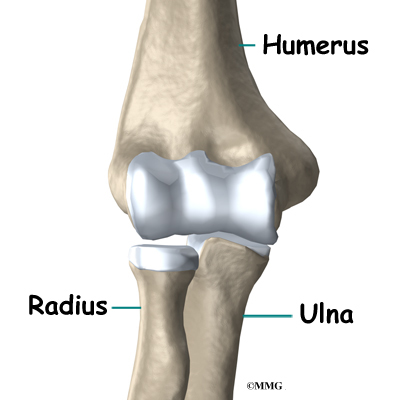 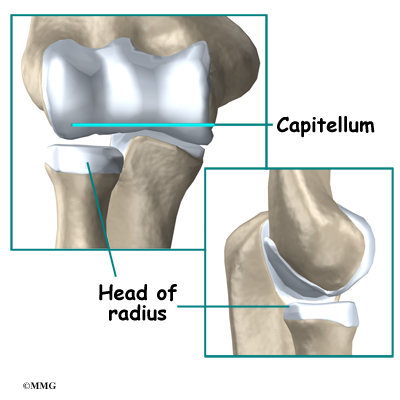 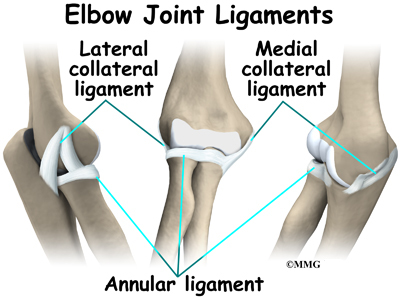 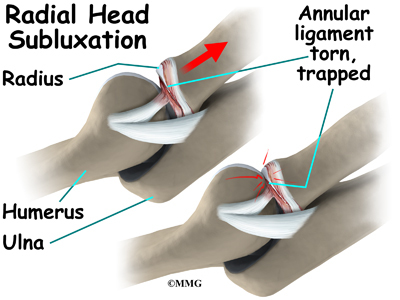 A sudden jerk on the arm is the main cause of nursemaid’s elbow dislocation in children. As mentioned, lifting the child up a step by the hand, giving the hand a sudden jerk, or pulling the child by the hand or forearm can result in an elbow injury of this type. Many times the child will simply present crying with pain and inability to move the elbow.

This is a common injury in children. It occurs most often around age two and is rarely seen after age eight. Lifting the child up a step by the hand, giving the hand a sudden jerk, or pulling the child away from a dangerous situation can result in the injury. If the child is not old enough to talk, it may be difficult to determine what happened. Playing with other children where one child swings the other around by the arms can result in the injury.

As a child gets older, a true elbow dislocation is often the result of trauma leading to fracture and dislocation. Elbow dislocation with bone fracture is common in children between the ages of three and 10. This is a much different and much more serious injury. The most common site of the fracture associated with dislocation in this age group is a supracondylar fracture. The fracture is located below the humeral shaft (upper arm bone) where the olecranon (tip of the ulnar bone of the forearm) fits into the humerus. The bone is thin here in children. The olecranon is the part of the elbow we feel as the tip of the elbow).

These injuries commonly occur in children too young to actually tell a parent or health care provider what happened. In young children, crying and refusing to use the arm while holding it against the body are common behaviors associated with nursemaid’s elbow. Pediatricians, family physicians and orthopedic surgeons usually recognize the pattern quickly because the injury is so common. Once you have seen a child with this condition, it is relatively easy to spot.

Pain and an inability to straighten the elbow or supinate the forearm by turning the palm up is typical. There is often tenderness along the lateral aspect of the elbow (side of the elbow away from the body). Bruising around the elbow several days after the injury is common.

In contrast, if the elbow is fully dislocated, it will look out of joint. There may be dimples or indentations of the skin over the dislocation where the bones have shifted position. Swelling on either side of the elbow may be a sign that there is a bone fracture. Pain can be intense until the arm is relocated.

The history and physical examination are probably the most important tools your physician uses to guide his or her diagnosis. Moving the elbow passively is painful, especially extension and supination. The doctor will check for any signs of injury to the nerves or blood vessels.

X-rays are consistently negative in children with elbow subluxation or dislocation due to the large amount of fibrous cartilage present around the elbow before the bones are fully formed. It is easy to misinterpret the irregular or fragmented growth lines as fractures. Additional views may be needed to help the radiologist make an accurate diagnosis. Before age five (when the bones start to ossify or become bony) a separation of the growth plate at the end of the bone may go undetected. Many health care providers will not order X-rays if they suspect nursemaid’s elbow and will simply try to reduce the subluxation with a gentle manipulation.

It is possible for the nursemaid’s elbow to relocate by itself.

Manual (closed) reduction can be done on site by a trained medical professional (e.g., at an athletic event or car accident) in an emergency. Closed reduction refers to the fact that the subluxation of the annular ligament and radial head are put back in place without surgery. Generally this procedure is done in a clinic or hospital setting.

The technique of reduction is relatively simple. Once the health care provider has decided that the situation is most likely a nursemaid’s elbow, the next step is to calm the child and establish trust. The elbow is gently taken through a complete range of motion from completely extended to fully flexed. While flexed the forearm is maximally supinated. In some cases, a small pop is felt or heard. This can indicate that the annular ligament has popped from the joint and back into the normal position. If there is no pop, the child is encouraged to use the arm. In many cases, within minutes the child is using the arm normally.

If the child continues to exhibit pain, X-rays may be ordered to make sure that no other injuries are present in the elbow such as a fracture. If the X-rays are normal, then the child will be placed in a sling and observed for several days and probably schedule to return to the office for re-evaluation in a week or 10 days. Over time, the vast majority of cases of nursemaid’s elbow resolve spontaneously and only in rare circumstances require any additional treatment.

What can be expected from treatment?

Nursemaid’s elbow generally doesn’t require rehabilitation after the subluxation is reduced. The child may favor the arm for several days and may feel more secure with a light splint for a day or two. The child should be encouraged to use the arm as tolerated. If there continues to be problems using the arm after several days or weeks, then it should probably be re-evaluated by an orthopedic surgeon.

It’s best to avoid any further traction on the elbow until healing has occurred. Pulling a heavy door open or lifting a heavy backpack are examples of activities and movements that put a traction force through the elbow. These kinds of movements should be avoided until healing occurs.

Parents of small children are cautioned to avoid pulling or lifting by the hand to prevent injuries of this type. Young children should always be picked up under the arms. They should never be forcibly pulled, lifted or swung through the air by the hand or wrist.