A Patient’s Guide to Meniscal Injuries 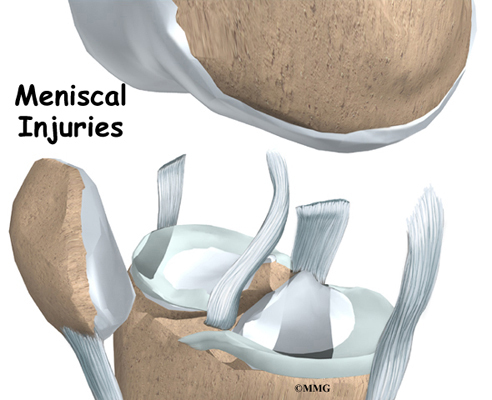 The meniscus is a commonly injured structure in the knee. The injury can occur in any age group. In younger people, the meniscus is fairly tough and rubbery, and tears usually occur as a result of a forceful twisting injury. The meniscus grows weaker with age, and meniscal tears can occur in aging adults as the result of fairly minor injuries, even from the up-and-down motion of squatting. 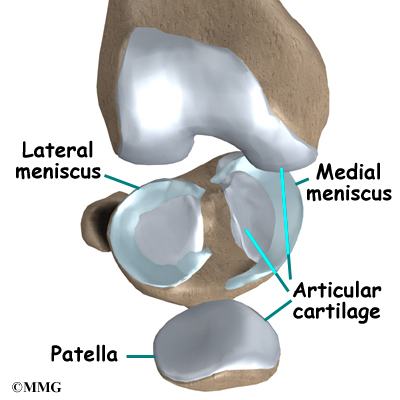 What is a meniscus, and what does it do?

There are two menisci between the shinbone (tibia) and thighbone (femur) in the knee joint. (Menisci is plural for meniscus.) 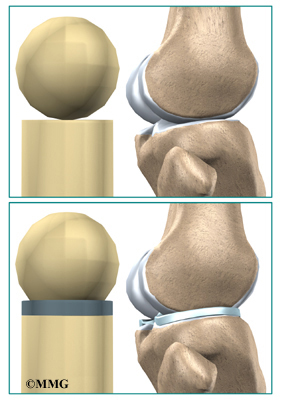 These two menisci act like shock absorbers in the knee. Forming a gasket between the shinbone and the thighbone, they help spread out the forces that are transmitted across the joint. Walking puts up to two times your body weight on the joint. Running puts about eight times your body weight on the knee. As the knee bends, the back part of the menisci takes most of the pressure. 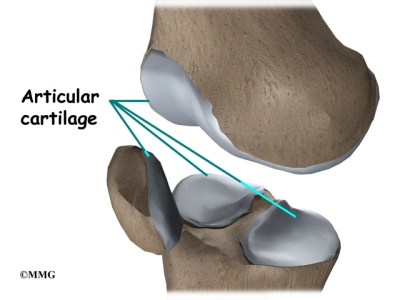 Articular cartilage is a smooth, slippery material that covers the ends of the bones that make up the knee joint. The articular cartilage allows the surfaces to slide against one another without damage to either surface. 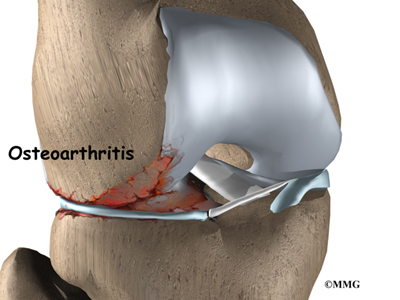 By spreading out the forces on the knee joint, the menisci protect the articular cartilage from getting too much pressure on one small area on the surface of the joint. Without the menisci, the forces on the knee joint are concentrated onto a small area, leading to damage and degeneration of the articular cartilage, a condition called osteoarthritis. 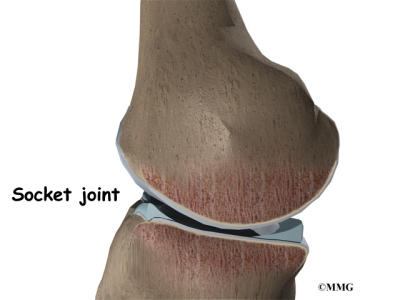 How do meniscal problems develop?

Meniscal injuries can occur at any age, but the causes are somewhat different for each age group. In younger people, the meniscus is a fairly tough and rubbery structure. Tears in the meniscus in patients under 30 years old usually occur as a result of a fairly forceful twisting injury. In the younger age group, meniscal tears are more likely to be caused by a sport activity. The entire inner rim of the medial meniscus can be torn in what is called a bucket handle tear. The meniscus can also have a flap torn from the inner rim. 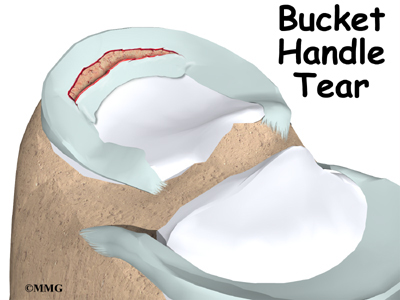 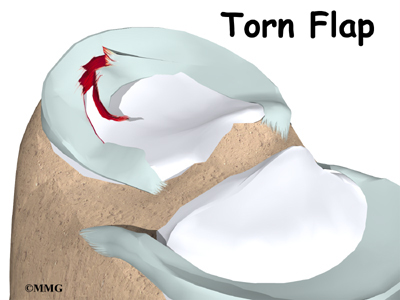 The tissue that forms the menisci weakens with age, making the menisci prone to degeneration and tearing. People of older ages often end up with a tear as result of a minor injury, such as from the up-and-down motion of squatting. Most often, there isn’t one specific injury to the knee that leads to the degenerative type of meniscal tear. These tears of the menisci are commonly seen as a part of the overall condition of osteoarthritis of the knee in aging adults. Degenerative tears cause the menisci to fray and become torn in many directions. 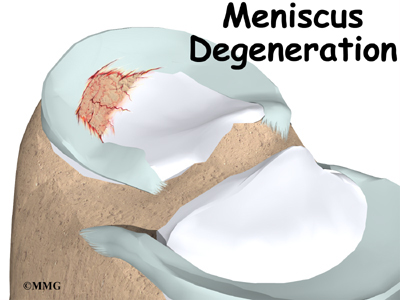 The most common problem caused by a torn meniscus is pain. The pain may be felt along the edge of the knee joint closest to where the meniscus is located. Or the pain may be more vague and involve the whole knee.

The knee may swell, causing it to feel stiff and tight. This is usually because fluid accumulates inside the knee joint. This is sometimes called water on the knee. This is not unique to meniscal tears, since it can also occur when the knee becomes inflamed.

The knee joint can also lock up if the tear is large enough. Locking refers to the inability to completely straighten out the knee. This can happen when a fragment of the meniscus tears free and gets caught in the hinge mechanism of the knee, like a pencil stuck in the hinge of a door. 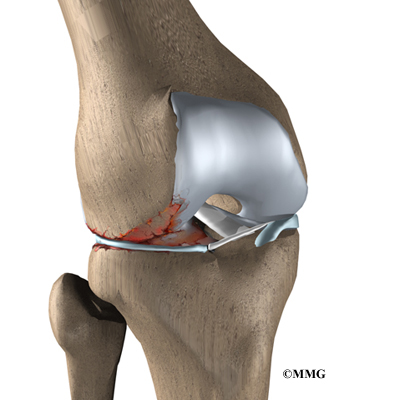 A torn meniscus can cause long-term problems. The constant rubbing of the torn meniscus on the articular cartilage may cause the joint surface to become worn, leading to knee osteoarthritis.

Related Document: A Patient’s Guide to Osteoarthritis of the Knee

How do doctors identify this problem?

Diagnosis begins with a history and physical exam. Your doctor will try to determine where the pain is located, whether you’ve had any locking, and if you have any clicks or pops with knee movement. X-rays will not show the torn meniscus. X-rays are mainly useful to determine if other injuries are present.

Magnetic resonance imaging (MRI) is very good at showing the meniscus. The MRI machine uses magnetic waves rather than X-rays to show the soft tissues of the body. This machine creates pictures that look like slices of the area. Usually, this test is done to look for injuries, such as tears in the menisci or ligaments of the knee. This test does not require any needles or special dye and is painless.

If there is uncertainty in the diagnosis following the history and physical examination, or if other injuries in addition to the meniscal tear are suspected, the MRI scan may be suggested.

If the history and physical examination indicate a torn meniscus, arthroscopy may be suggested to confirm the diagnosis and treat the problem at the same time. Arthroscopy is an operation that involves inserting a miniature fiber-optic TV camera into the knee joint, allowing the orthopedic surgeon to look at the structures inside the joint directly. The arthroscope lets the surgeon see the condition of the articular cartilage, the ligaments, and the menisci.

What can be done for this injury?

Initial treatment for a torn meniscus focuses on decreasing pain and swelling in the knee. Rest and anti-inflammatory medications, such as aspirin, can help decrease these symptoms. You may need to use crutches until you can walk without a limp.

Some patients may receive physical therapy treatments for meniscal problems. Therapists treat swelling and pain with the use of ice, electrical stimulation, and rest periods with your leg supported in elevation. Exercises are used to help you regain normal movement of joints and muscles. 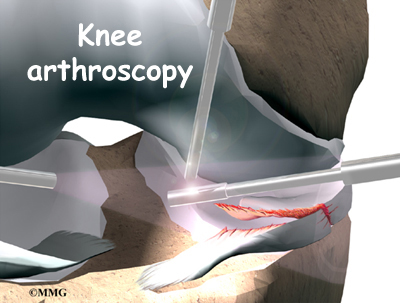 If the knee keeps locking up and can’t be straightened out, surgery may be recommended as soon as reasonably possible to remove the torn part that is getting caught in the knee joint. But even a less severely torn meniscus may not heal on its own. If symptoms continue after nonsurgical treatment, surgery will probably be suggested to either remove or repair the torn portion of the meniscus.

Surgeons use an arthroscope (mentioned earlier) during surgery for an injured meniscus. Small incisions are made in the knee to allow the insertion of the camera into the joint.

Whenever possible, surgeons prefer to repair a torn meniscus, rather than remove even a small piece. Young people who have recently torn their meniscus are generally good candidates for repair. Older patients with degenerative tears are not. 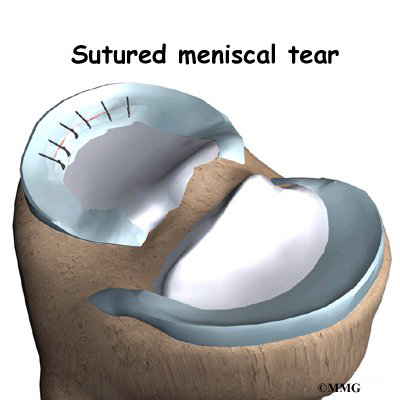 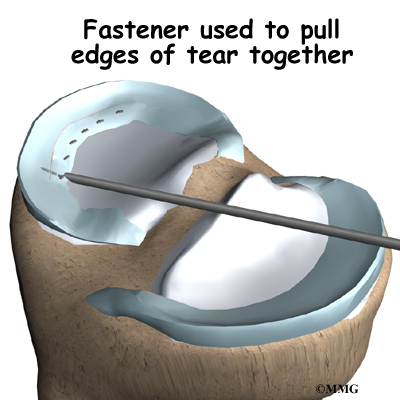 Surgeons are beginning to experiment with different ways to replace a damaged meniscus. One way is by transplanting tissue, called an allograft, from another person’s body. Further investigation is needed to see how well these patients do over a longer period of time.

Nonsurgical rehabilitation for a meniscal injury typically lasts six to eight weeks. Therapists use methods such as electrical stimulation and ice to reduce pain and swelling. Exercises to improve knee range of motion and strength are added gradually. If your doctor prescribes a brace, your therapist will work with you to obtain and use the brace.

You can return to your sporting activities when your quadriceps and hamstring muscles are back to nearly their full strength and control, you are not having swelling that comes and goes, and you aren’t having problems with the knee giving way.

Rehabilitation proceeds cautiously after surgery on the meniscus, and treatments will vary depending on whether you had part of the meniscus taken out or your surgeon repaired or replaced the meniscus.

Patients are strongly advised to follow the recommendations about how much weight can be borne while standing or walking. After a partial meniscectomy, your surgeon may instruct you to place a comfortable amount of weight on your operated leg using a walking aid. After a meniscal repair, however, patients may be instructed to keep their knee straight in a locked knee brace and to put only minimal or no weight on their foot when standing or walking for up to six weeks.

Patients usually need only a few therapy visits after meniscectomy. Additional treatments may be scheduled if there are problems with swelling, pain, or weakness. Rehabilitation is slower after a meniscal repair or allograft procedure. At first, expect to see the physical therapist two to three times a week. If your surgery and rehabilitation go as planned, you may only need to do a home program and see your therapist every few weeks over a six-to eight-week period.