A Patient’s Guide to Lyme Disease 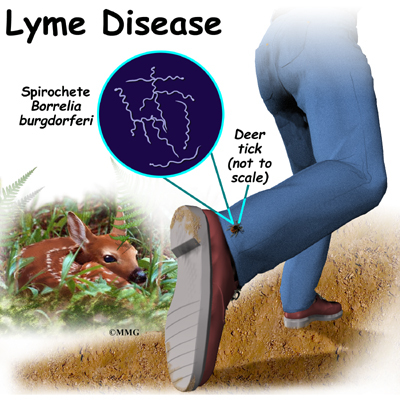 Lyme disease is an inflammatory disease caused by tick bites. It is the most common tick-borne disease in North America, Europe, and Asia. Connecticut has the highest annual rate of new cases of Lyme disease each year. The name Lyme disease was used because of the number of children in Lyme, Connecticut who first developed this problem back in the late 1970s.

More than 90 percent of the Lyme disease cases in the United States continue to occur in Connecticut and nine other states including New York, New Jersey, Rhode Island, Massachusetts, Pennsylvania, Wisconsin, Delaware, Maryland, and Minnesota.

It is possible to visit these areas and have the infection show up later, when you are back home. And although children between the ages of five and nine seem to be affected most often, adults between the ages of 55 and 59 seem to have a peak incidence as well. The summer months are the peak time when infection may occur, but cases have been reported in all 50 states year-round.

What parts of the body are affected?

Lyme disease can cause inflammation in many systems of the body if left untreated. It mostly affects the skin, joints, the heart, and the nervous system. When the joints are affected, the knee is involved most often. Lyme-associated arthritis has also been reported in the shoulder, elbow, hip, and ankle.

Lyme disease is caused by Borrelia burgdorferi, a spiral-shaped organism transmitted through the bite of an infected tick. The human body mounts a reaction to the infecting organism that triggers production of inflammatory agents throughout the body. These inflammatory agents are the chemicals produced by the body’s immune system that normally fight off infection.

Doctors divide the symptoms of Lyme disease into three phases: early localized, early disseminated, and late disease. The three phases of symptoms can overlap. Many patients never show early symptoms at all.

Early localized disease refers to a red rash in the area of the tick bite. This rash shows up two to 30 days after the tick bite. The bite itself is usually found near the waist or belt line, or in other warm, moist areas of the body. In children, the rash is seen first on the head and neck, arms and legs, or back and less often on the abdomen, groin, or chest. The bite may burn, itch, or hurt. The rash usually grows over a period of days. The rash may be in a bulls-eye pattern, red with a white spot in the middle, or completely red.

Most patients with early localized Lyme disease also complain of flu-like symptoms, such as headaches, fatigue, and muscle and joint pain.

Early disseminated disease shows up days to months after the tick bite. Patients may not remember any rashes or bites. The most common symptoms of early disseminated disease are cardiac and nervous system problems. About eight percent of patients who have the rash and are not treated with antibiotics develop heart problems referred to as Lyme carditis. Heart effects include heart blockage and weakening of the heart muscle. The patient may experience dizziness, fainting, fatigue, shortness of breath, and/or heart palpitations. Most of the time, the heart symptoms clear up on their own or after treatment.

About ten percent of patients who don’t receive antibiotics develop damage to the nervous system. Neurologic symptoms also tend to go away on their own, but very slowly. These neurologic symptoms can include meningitis and headaches. Individual nerves can be affected causing numbness, weakness, and pain in the areas the damaged nerve travels.

Late disease symptoms develop months or even years after the tick bite. Some patients who have late disease symptoms have never had any other symptoms of Lyme disease. Late disease causes arthritis pain that comes and goes in many joints. About ten percent of people with late Lyme disease develop chronic (long-lasting) arthritis of one knee. Other joints can be affected (e.g., hip, shoulder, elbow, ankle) but the number of patients with other joint involvement is considerably less.

Many patients who have had Lyme disease describe headaches, fatigue, and joint pain that can last for months after treatment. These problems generally go away without any extra treatment, but very slowly.

Doctors diagnose Lyme disease based on your health history and a physical exam. Your doctor may order blood tests, but they are only used to confirm the diagnosis. The techniques used to test your blood are called ELISA and Western blot. Both tests can sometimes give false positive or unclear results. If you have had the infection for less than six weeks, your body may not even be making enough antibodies to be detected in the tests.

Lyme disease affecting the knee must be differentiated from septic (infectious) arthritis, which has both a different cause and a different treatment. The two distinguishing features of septic knee arthritis that set it apart from Lyme knee arthritis are refusal to put weight on the knee and fever (more then 101.5 degrees Fahrenheit). Patients with Lyme disease may have a low-grade fever and pain on weight-bearing but do not exhibit the high fever and refusal to put weight on the affected leg observed more often with septic knee arthritis.

When trying to rule out septic arthritis, the synovial fluid (the lubricating fluid of a joint) or spinal fluid may need to be analyzed. Studies show that patients with septic (infectious) knee arthritis are 3.6 times more likely to have a high synovial fluid cell count compared with patients with Lyme disease. But some patients with Lyme disease have elevated synovial fluid cell count, too so this test is just one of many tools used to diagnose the problem. The fluid can also be cultured to identify the presence of bacteria such as staphylococcus aureus (staph infection), streptococcus pneumonia (strep infection), or other less common types of bacterial infections. Bacteria associated with septic arthritis help rule out a diagnosis of Lyme disease.

What can be done for Lyme disease?

In a small number of cases, it may be necessary to surgically drain the joint of fluid. This is especially true if there is a suspicion of septic arthritis that cannot be confirmed or differentiated from Lyme disease. In cases of true Lyme joint disease that does not respond to medical treatment, the surgeon may have to remove some of the damaged joint synovium. The procedure is called a synovectomy.

Headaches, fatigue, and muscle and joint pain may continue for months after finishing the antibiotics. Neurologic damage may take even longer to go away, as the nervous system regenerates only one or two millimeters each day. This does not mean that you need more antibiotics. Your body just needs more time to heal. If the antibiotics do not help your symptoms at all, you and your doctor should consider that Lyme disease may not be the cause of your symptoms and look for other possible causes.

The risk of getting Lyme disease is very small, even if a tick has bitten you. Doctors do not treat you just in case. You must show symptoms.

The best treatment for Lyme disease is prevention. Check for ticks at the end of a day outdoors. Wear light clothes so you can see ticks. Wear long clothing, and tuck your pants into your socks. And finally, use a bug spray that contains DEET (a chemical used in some types of insect repellents) to keep the ticks away.