A Patient’s Guide to Hand Anatomy 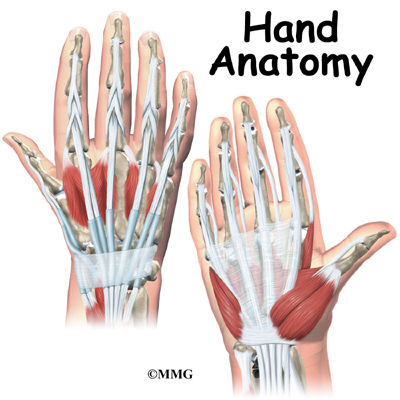 Few structures of the human anatomy are as unique as the hand. The hand needs to be mobile in order to position the fingers and thumb. Adequate strength forms the basis for normal hand function. The hand also must be coordinated to perform fine motor tasks with precision. The structures that form and move the hand require proper alignment and control in order for normal hand function to occur.

In addition to reading this article, be sure to watch our Hand Anatomy Animated Tutorial Video.

The important structures of the hand can be divided into several categories. These include 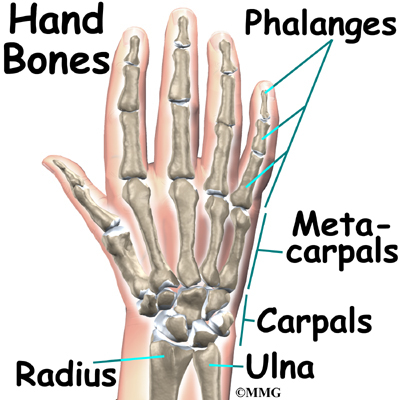 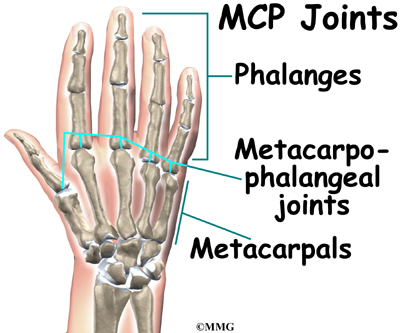 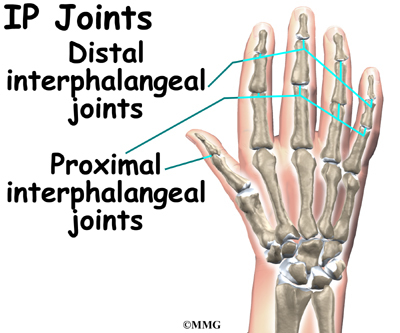 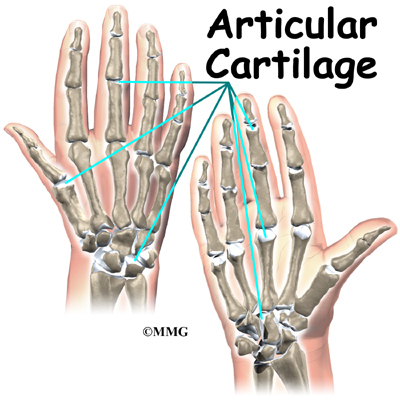 There are 27 bones within the wrist and hand. The wrist itself contains eight small bones, called carpals. The carpals join with the two forearm bones, the radius and ulna, forming the wrist joint. Further into the palm, the carpals connect to the metacarpals. There are five metacarpals forming the palm of the hand. One metacarpal connects to each finger and thumb. Small bone shafts called phalanges line up to form each finger and thumb.

The main knuckle joints are formed by the connections of the phalanges to the metacarpals. These joints are called the metacarpophalangeal joints (MCP joints). The MCP joints work like a hinge when you bend and straighten your fingers and thumb.

The three phalanges in each finger are separated by two joints, called interphalangeal joints (IP joints). The one closest to the MCP joint (knuckle) is called the proximal IP joint (PIP joint). The joint near the end of the finger is called the distal IP joint (DIP joint). The thumb only has one IP joint between the two thumb phalanges. The IP joints of the digits also work like hinges when you bend and straighten your fingers and thumb.

The joints of the hand, fingers, and thumb are covered on the ends with articular cartilage. This white, shiny material has a rubbery consistency. The function of articular cartilage is to absorb shock and provide an extremely smooth surface to
facilitate motion. There is articular cartilage essentially everywhere that two bony surfaces move against one another, or articulate. 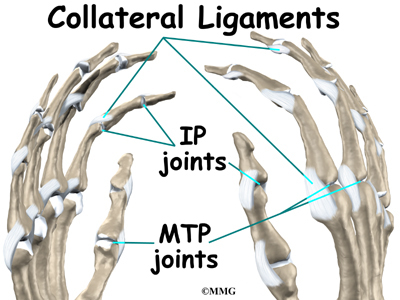 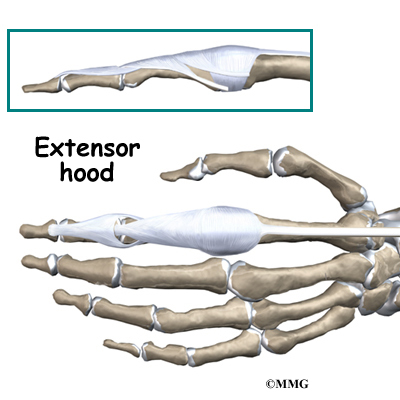 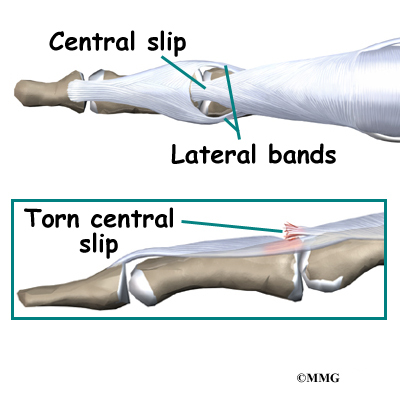 Ligaments are tough bands of tissue that connect bones together. Two important structures, called collateral ligaments, are found on either side of each finger and thumb joint. The function of the collateral ligaments is to prevent abnormal sideways bending of each joint.

In the PIP joint (the middle joint between the main knuckle and the DIP joint), the strongest ligament is the volar plate. This ligament connects the proximal phalanx to the middle phalanx on the palm side of the joint. The ligament tightens as the joint is straightened and keeps the PIP joint from bending back too far (hyperextending). Finger deformities can occur when the volar plate loosens from disease or injury.

Many of the muscles that control the hand start at the elbow or forearm. They run down the forearm and cross the wrist and hand. Some control only the bending or straightening of the wrist. Others influence motion of the fingers or thumb. Many of these muscles help position and hold the wrist and hand while the thumb and fingers grip or perform fine motor actions.

Most of the small muscles that work the thumb and pinky finger start on the carpal bones. These muscles connect in ways that allow the hand to grip and hold. Two muscles allow the thumb to move across the palm of the hand, an important function called thumb opposition. 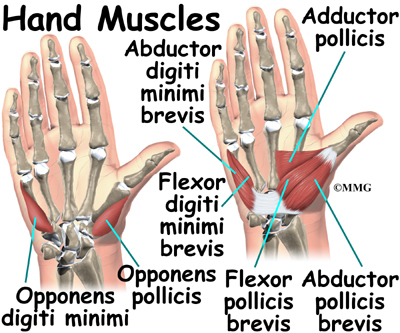 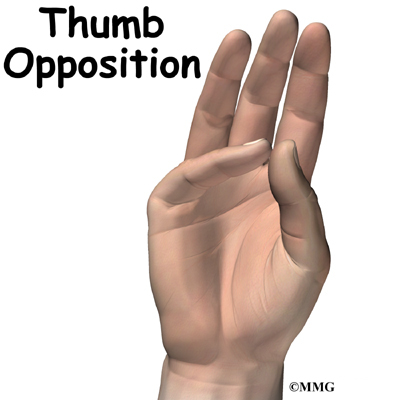 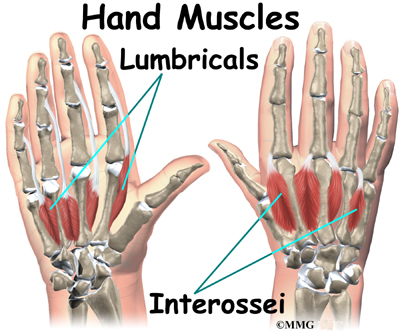 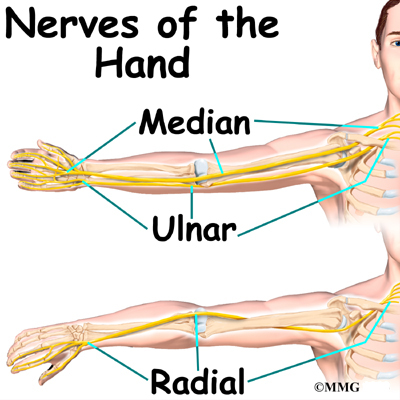 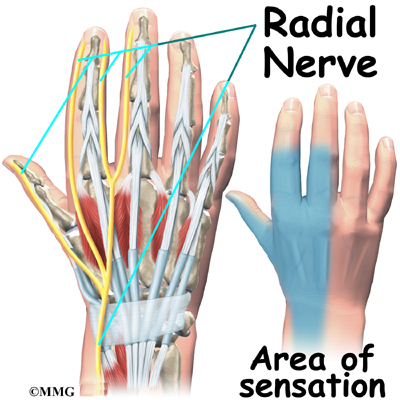 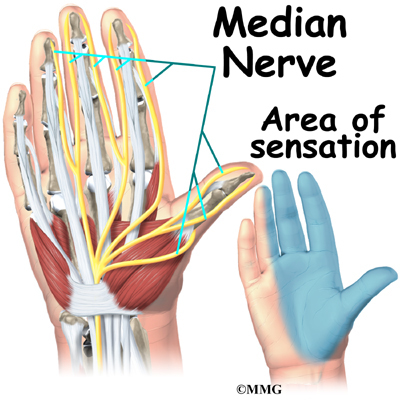 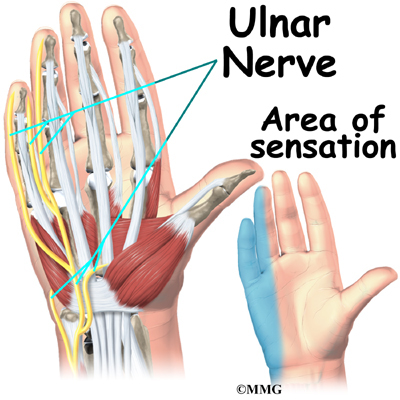 All of the nerves that travel to the hand and fingers begin together at the shoulder: the radial nerve, the median nerve, and the ulnar nerve. These nerves carry signals from the brain to the muscles that move the arm, hand, fingers, and thumb. The nerves also carry signals back to the brain about sensations such as touch, pain, and temperature.

The median nerve travels through a tunnel within the wrist called the carpal tunnel. This nerve gives sensation to the thumb, index finger, long finger, and half of the ring finger. It also sends a nerve branch to control the thenar muscles of the thumb. The thenar muscles help move the thumb and let you touch the pad of the thumb to the tips each of each finger on the same hand, a motion called opposition.

The ulnar nerve travels through a separate tunnel, called Guyon’s canal. This tunnel is formed by two carpal bones, the pisiform and hamate, and the ligament that connects them. After passing through the canal, the ulnar nerve branches out to supply feeling to the little finger and half the ring finger. Branches of this nerve also supply the small muscles in the palm and the muscle that pulls the thumb toward the palm.

The nerves that travel to the hand are subject to problems. Constant bending and straightening of the wrist and fingers can lead to irritation or pressure on the nerves within their tunnels and cause problems such as pain, numbness, and weakness in the hand, fingers, and thumb.

Traveling along with the nerves are the large vessels that supply the hand with blood. The largest artery is the radial artery that travels across the front of the wrist, closest to the thumb. The radial artery is where the pulse is taken in the wrist. The ulnar artery runs next to the ulnar nerve through Guyon’s canal (mentioned earlier). The ulnar and radial arteries arch together within the palm of the hand, supplying the front of the hand, fingers, and thumb. Other arteries travel across the back of the wrist to supply the back of the hand, fingers, and thumb. 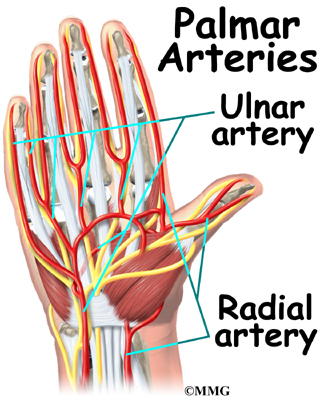 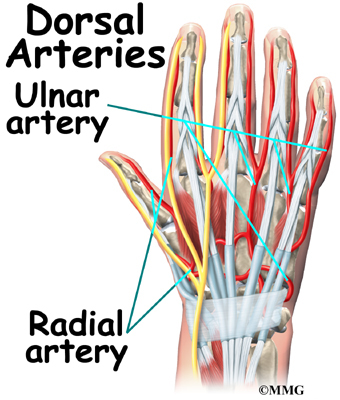 The hand is formed of numerous structures that have an important role in normal hand function. Conditions that change the way these structures work can greatly impact whether the hand functions normally. When our hands are free of problems, it’s easy to take the complex anatomy of the hand for granted.