A Patient’s Guide to Foot Anatomy 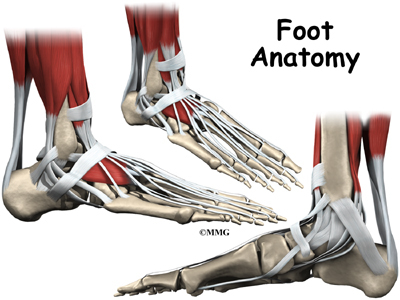 Our feet are constantly under stress. It’s no wonder that 80 percent of us will have some sort of problem with our feet at some time or another. Many things affect the condition of our feet: activity level, occupation, other health conditions, and perhaps most importantly, shoes. Many of the problems that arise in the foot are directly related to shoes, so it is very important to choose shoes that are good for your feet.

The foot is an incredibly complex mechanism. This introduction to the anatomy of the foot will not be exhaustive but rather highlight the structures that relate to conditions and surgical procedures of the foot.

In addition to reading this article, be sure to watch our Foot Anatomy Animated Tutorial Video.

The important structures of the foot can be divided into several categories. These include 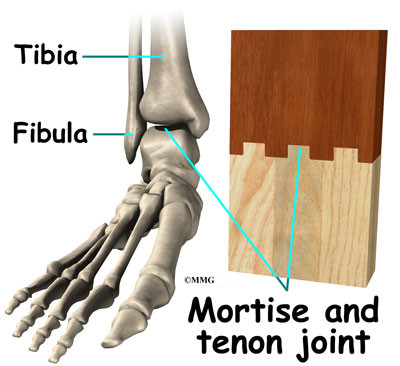 The skeleton of the foot begins with the talus, or ankle bone, that forms part of the ankle joint. The two bones of the lower leg, the large tibia and the smaller fibula, come together at the ankle joint to form a very stable structure known as a
mortise and tenon joint.

The mortise and tenon structure is well known to carpenters and craftsmen who use this joint in the construction of everything from furniture to large buildings. The arrangement is very stable. 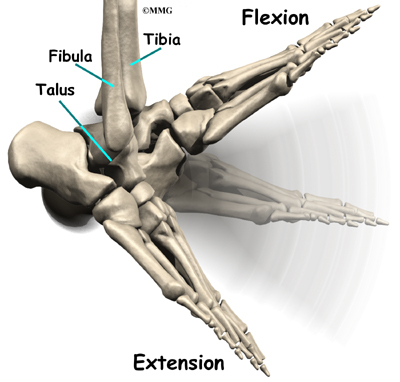 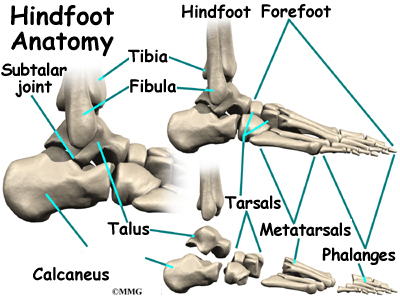 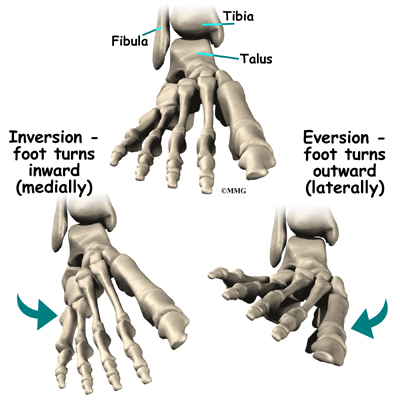 Just down the foot from the ankle is a set of five bones called tarsal bones that work together as a group. These bones are unique in the way they fit together. There are multiple joints between the tarsal bones. When the foot is twisted in one direction by the muscles of the foot and leg, these bones lock together and form a very rigid structure. When they are twisted in the opposite direction, they become unlocked and allow the foot to conform to whatever surface the foot is contacting. 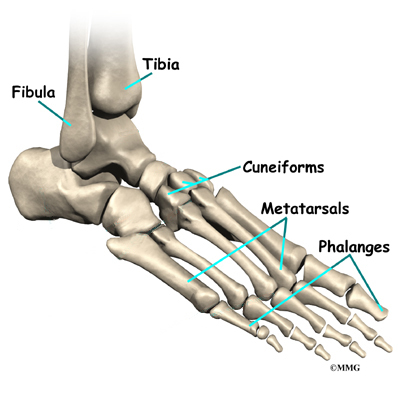 The tarsal bones are connected to the five long bones of the foot called the metatarsals. The two groups of bones are fairly rigidly connected, without much movement at the joints.

Finally, there are the bones of the toes, the phalanges. The joints between the metatarsals and the first phalanx is called the metatarsophalangeal joint (MTP). These joints form the ball of the foot, and movement in these joints is very important for a normal walking pattern.

Not much motion occurs at the joints between the bones of the toes. The big toe, or hallux, is the most important toe for walking, and the first MTP joint is a common area for problems in the foot. 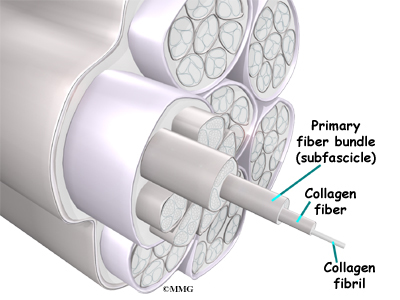 Ligaments are the soft tissues that attach bones to bones. Ligaments are very similar to tendons. The difference is that tendons attach muscles to bones. Both of these structures are made up of small fibers of a material called collagen. The collagen fibers are bundled together to form a rope-like structure. Ligaments and tendons come in many different sizes, and like rope, are made up of many smaller fibers. The thicker the ligament (or tendon) the stronger the ligament (or tendon) is. 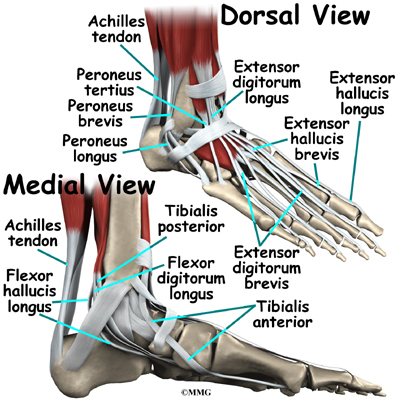 The large Achilles tendon is the most important tendon for walking, running, and jumping. It attaches the calf muscles to the heel bone to allow us to raise up on our toes. The posterior tibial tendon attaches one of the smaller muscles of the calf to the underside of the foot. This tendon helps support the arch and allows us to turn the foot inward. The toes have tendons attached that bend the toes down (on the bottom of the toes) and straighten the toes (on the top of the toes). The anterior tibial tendon allows us to raise the foot. Two tendons run behind the outer bump of the ankle (called the lateral malleolus) and help turn the foot outward. 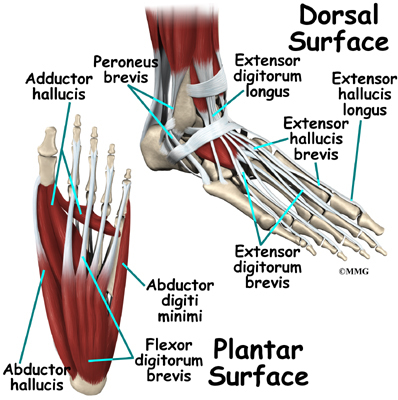 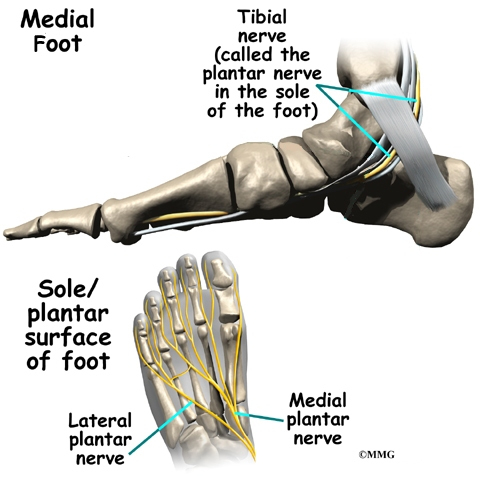 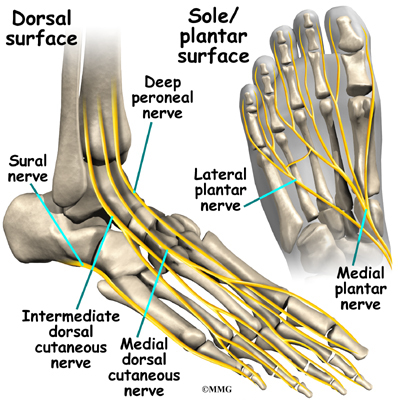 The main blood supply to the foot, the posterior tibial artery, runs right beside the nerve of the same name. Other less important arteries enter the foot from other directions. One of these arteries is the dorsalis pedis that runs down the top of the foot. You can feel your pulse where this artery runs in the middle of the top of the foot. 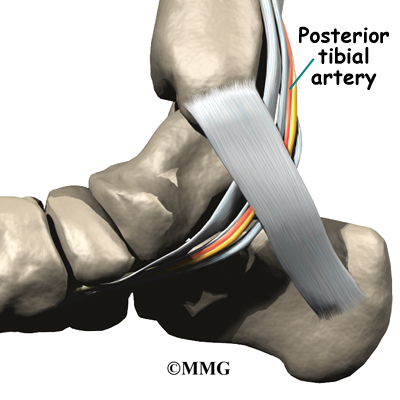 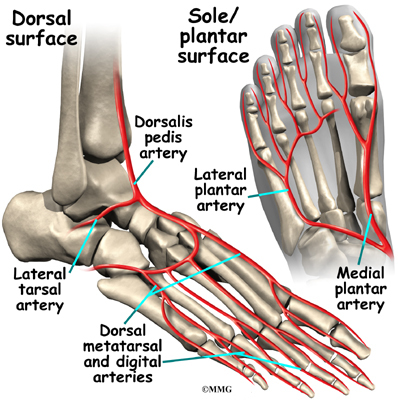 As you can see, the anatomy of the foot is very complex. When everything works together, the foot functions correctly. When one part becomes damaged, it can affect every other part of the foot and lead to problems.