A Patient’s Guide to Femoroacetabular Impingement of the Hip 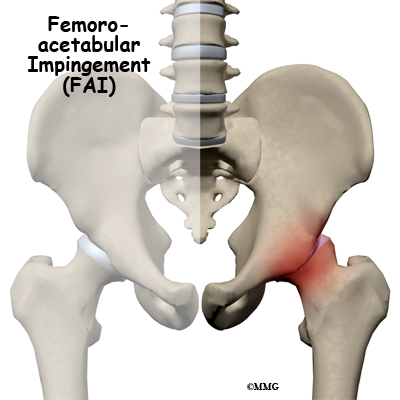 What part of the body is affected? 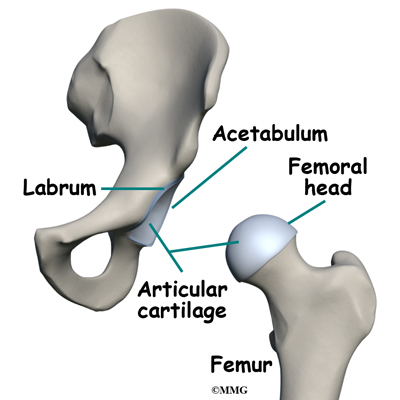 Femoroacetabular refers to the place in the hip where the round head of the femur (thigh bone) comes in contact with the acetabulum or hip socket. Two types of impingement are known to cause pinching of the soft tissues in this area. 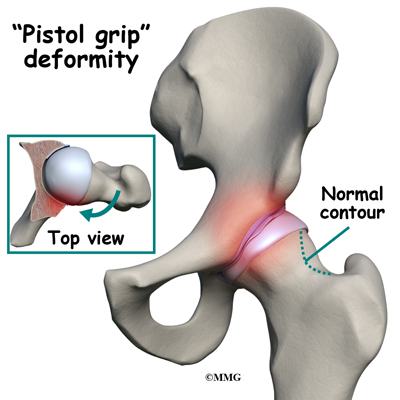 The first is called cam-type impingement. This occurs when the round head of the femur isn’t as round as it should be. It’s more of a pistol grip shape. It’s even referred to as a pistol grip deformity. The femoral head isn’t round enough on one side (and it’s too round on the other side) to move properly inside the socket.

Sometimes cam-type impingement occurs as a result of some other hip problem (e.g., Legg-Calvé-Perthes disease, slipped capital femoral epiphysis or SCFE). But most of the time, it occurs by itself and is the main problem. Men are affected by cam-type impingement more often than women. 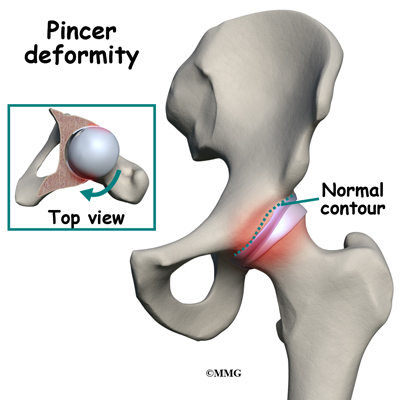 The second type of impingement is called pincer-type (more common in women). In this type, the socket covers too much of the femoral head. As the hip moves, the labrum comes in contact with the femoral neck just below the femoral head.

Pincer-type impingement is usually caused by some other problem. It could be as a result of 1) hip dysplasia, 2) a complication after osteotomy surgery to correct hip dysplasia, or 3) an abnormal position of the acetabulum called retroversion. Hip dysplasia is a deformity of the hip (either of the femoral head or the acetabulum, or both) that can lead to hip dislocation.

Related Document: Developmental Dysplasia of the Hip in Children

What causes this problem?

The cause of the problem has been under considerable debate for a long time. Now with better imaging studies, we know that some subtle changes in the shape of the femoral head may be the cause of FAI. Other anatomical changes in the angle of the hip may also contribute to this problem.

The basic problem is that the head of the femur butts up against the cartilage rim around the acetabulum and pinches it. An alternate type of femoral acetabular impingement causes abnormal jamming of the head-neck junction. 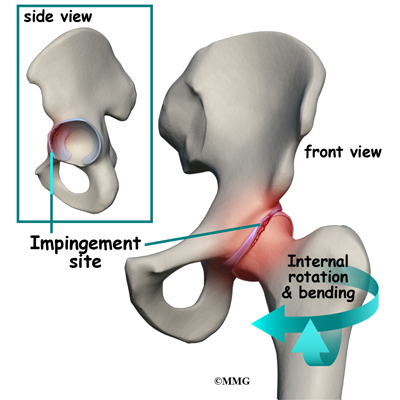 Normally, the femoral head moves smoothly inside the hip socket. The socket is just the right size to hold the head in place. If the acetabulum is too shallow or too small, the hip can dislocate. In the case of FAI, the socket may be too deep.

The rim of the cartilage hangs too far over the head. When the femur flexes (bends) and internally rotates, the cartilage gets pinched. Over time, this pinching or impingement of the labrum can cause fraying and tearing of the edges and/or osteoarthritic changes at the impingement site.

At the same time, with changes in the shape and structure of the hip, there are changes in normal hip movement. There may be too much hip adduction and internal rotation. Hip adduction refers to movement of the leg toward the body. Muscle weakness of the hip abductor muscles, hip extensors, and hip external rotators add to the problem. Hip abduction is moving the leg away from the body.

With the combined effects of anatomic changes in the hip and the resultant muscle imbalances, repetitive motions can create mini-traumas to the hip joint. The result can be an additional problem: partial or complete labral tears. A complete rupture is referred to as an avulsion where the labrum is separated from the acetabular cartilage where it normally attaches.

The first noticeable symptom of femoroacetabular impingement is often deep groin pain with activities that stress hip motion. Prolonged walking is especially difficult. Although the condition is often present on both sides, the symptoms are usually only felt on one side. In some cases, the groin pain doesn’t start until the person has been sitting and starts to stand up. There is often a slight limp because of pain and limited motion.

Groin pain associated with femoroacetabular impingement can be accompanied by clicking, locking, or catching when chronic impingement has resulted in a labral tear.

When femoroacetabular impingement and a labral tear are both present, symptoms get worse with long periods of standing, sitting, or walking. Pivoting on the involved leg is also reproduces the pain. Some patients have a positive Trendelenburg sign (hip drops down on the right side when standing on the left leg and vice versa). 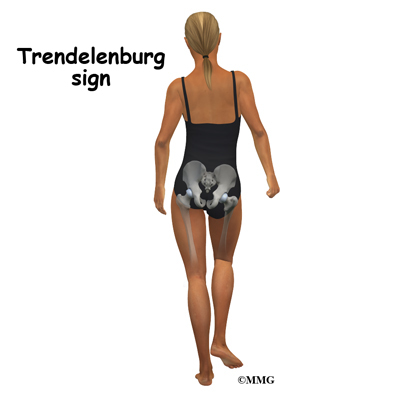 As is often the case, one problem can lead to others. With femoroacetabular impingement, hip bursitis can develop. The gluteal (buttock) muscles may be extra tender or sore from trying to compensate and correct the problem. The pain can be constant and severe enough to limit all recreational activities and sports participation.

The diagnosis begins with a patient interview and history. Then the orthopedic surgeon performs a physical exam. The physician looks at pelvic and hip motion and palpates muscles and tendons for areas of tenderness.

Several tests can be done to identify what’s going on. The patient lies on the table on his or her back. The examiner bends the leg up, internally rotates the hip, and presses the knee toward the other leg. This position puts the hip in such a position that impingement occurs and reproduces the painful symptoms.

The clinical exam is followed up by imaging studies including X-rays, MRIs, and CT scans. X-rays show the presence of any extra bone build up as well as the position and alignment of the bones and joint. X-rays show the shape of the femoral head.

Any asymmetries (i.e., where the head is no longer an even round shape) are visible on X-rays. The radiologist and orthopedic surgeon reviewing the radiographs also look for three signs as an indication that there is retroversion: the crossover sign, the posterior wall sign, and the ischial sign.

MRIs can show any damage to the labrum but not necessarily any changes to the surface of the hip joint. The presence of edema (swelling) under the bone may show up and requires further evaluation to decide if it is from femoroacetabular impingement or some other cause (e.g., cyst, tumor, stress fracture). Using MRI with a dye injected into the joint (called magnetic resonance arthrography or MRA) provides greater detail of the joint surface and may be needed.

CT scans help show the exact shape of the bone and reveal any abnormalities in the bone structure. CT scans might be the most helpful when arthroscopic surgery is planned. It gives the surgeon a better idea of what needs to be done to reshape the bone. If the procedure is going to be done with an open incision, then the CT scan isn’t necessary. The surgeon will see everything once the area is opened up.

What can be done for this condition?

Once all the test results are available, a course of action is determined. This may be conservative (nonoperative) care with antiinflammatories and physical therapy. In some cases, surgery is recommended right away. Early diagnosis and surgical correction may be able to restore normal hip motion. Delaying surgery is possible for other patients but the long-term effect(s) of putting surgery off have not been determined.

A physical therapist will carry out an examination of joint motion; hip, trunk, and knee muscle strength; posture; alignment; and gait/movement analysis (looking at walking/movement patterns). A plan of care is designed for each patient based on his or her individual factors and characteristics.

Nonoperative care starts with activity modification (e.g., avoiding pivoting on the involved leg when there is a labral tear, avoiding prolonged periods of inactivity or activity). This part of the program must be followed for at least six months (often longer).

Improving biomechanical function of the hip involves strengthening appropriate muscles, restoring normal neuromuscular control, and addressing any postural issues. Tight muscles around the hip can contribute to pinching between the femoral head and acetabulum in certain positions. A program of flexibility and stretching exercises won’t change the bony abnormalities present but can help lengthen the muscles and reduce contact and subsequent impingement.

Some patients may also benefit from intra-articular injection with a numbing agent combined with an antiinflammatory (steroid) medication. Anyone needing surgery will also benefit from physical therapy first to address muscle imbalances resulting in abnormal movement patterns that lead to femoral acetabular impingement.

Surgery is advised when there is persistent pain despite a good effort at conservative care and when there are obvious structural abnormalities of the hip. Once it has been decided that surgery is the way to go, the surgeon has three choices: 1) full open incision and correction of the problem, 2) arthroscopic surgery, and 3) osteotomy. 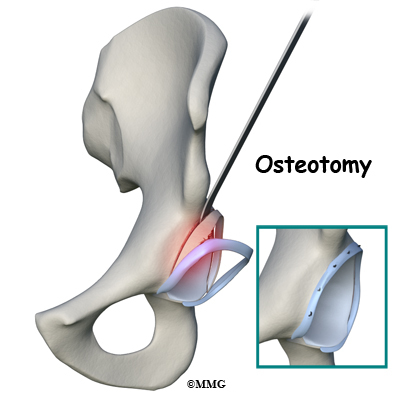 With the fully open surgical procedure, the head of the femur is dislocated from the socket to make the changes and corrections and reshape it. With arthroscopic surgery, dislocation is not required. Osteotomy (reshaping the socket) is done for pincer-type impingement.

Whenever possible, the surgeon tries to save the hip. But when there is extensive damage to the cartilage, hip resurfacing or total joint replacement may be needed. There are many factors to consider when making this decision. The patient’s age, findings on imaging studies, type and severity of deformity, and the presence of arthritic changes are important. 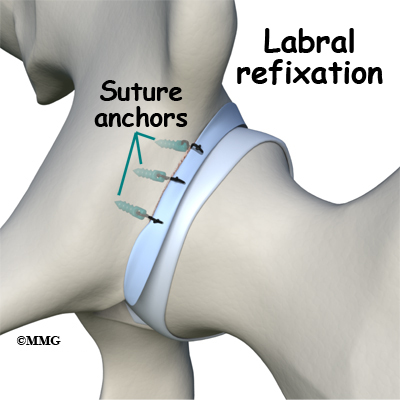 If there is a labral tear, surgery is usually done arthroscopically to repair (whenever possible) the damage. The surgeon trims the acetabular rim and then reattaches the torn labrum. This procedure is called labral refixation.

Each layer of tissue is sewn back together and reattached as closely as possible to its original position (called the footprint) along the acetabular rim. When repair is not possible, then debridement (shaving or removing) the torn tissue or pieces of tissue may be necessary.

The goal of conservative management is to relieve pain and improve function by correcting muscle strength imbalances. When both legs have nearly equal strength, it is possible to resume a full and normal level of all activities (so long as there is no pain during any of those movements or activities).

For the young or active adult, this includes activities of daily living as well as recreational and sports participation. Older adults experiencing labral tears associated with the impingement problem may expect to be able to resume normal daily functions but may still find it necessary to limit prolonged sitting or standing positions.

Correction of the problem can result in improved function and pain relief. The hope is that early treatment can prevent arthritic changes but long-term studies have not been done to proven this idea.

After surgery, patients will be restricted to a partial weight-bearing status. The exact recommendations will depend on the amount of bone removed and whether or not the labrum was torn and repaired. Activity restriction is important for the first few weeks after surgery in order to avoid fatiguing or overloading the hip muscles.

Stationary bike exercises are allowed early on so long as the bike seat is kept high enough to avoid pinching at the hip during the flexion portion of the pedal cycle. Athletes and sports participants will be guided back to full participation by the physical therapist, usually five to six months after rehab. Many patients report continued improvements in their symptoms even up to the end of the first year after surgery.