A Patient’s Guide to Clubfoot 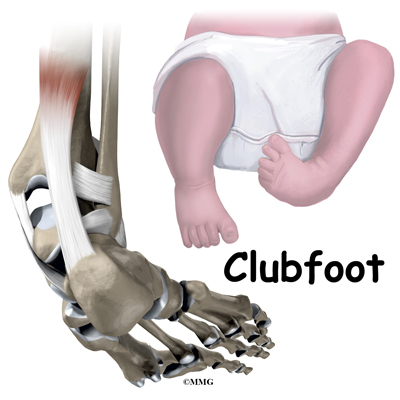 Clubfoot is a congenital condition that affects newborn infants. The medical term for clubfoot is Congenital Talipes Equinovarus. This condition has been described in medical literature since the ancient Egyptians. Congenital means that the condition is present at birth and occurred during fetal development. The condition is not rare and the incidence varies widely among different races. In the caucasian population, about one in a thousand infants are born with a clubfoot. In Japan, the numbers are one in two thousand and in some races in the South Pacific it can be as high as seven infants in one thousand who are born with a clubfoot. The condition affects both feet in about half of the infants born with clubfoot. Clubfoot affects twice as many males as females. 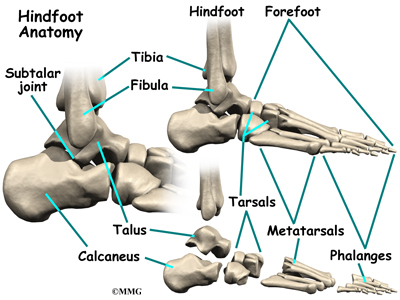 The tarsal bones are the seven bones that make up the heel and the midfoot. The metatarsals and the phalanges are connected to the tarsals and form the forefoot. Clubfoot primarily affects three bones: the calcaneus, talus and navicular. Other bones can be involved as the deformity can affect the growth of the entire foot to some degree. 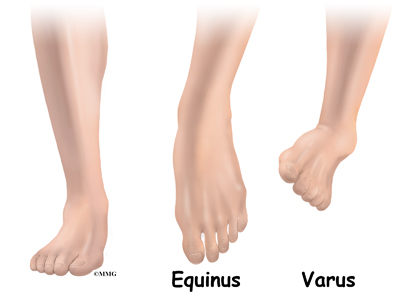 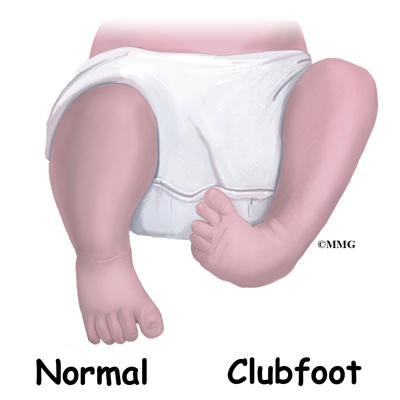 The clubfoot is unmistakable. The foot is turned under and towards the other foot. The medical terminology for this position is equinus and varus. Equinus means that the toes are pointed down and the ankle flexed forward (sort of like the position of the foot when a ballet dancer is on her toes). Varus means tilted inward. The ankle is in varus when you try to put the soles of your feet together. 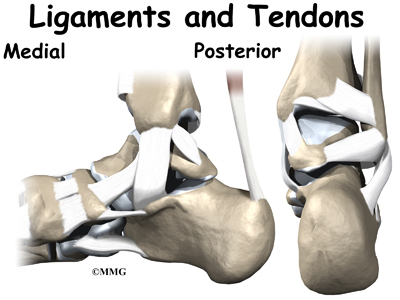 This twisted position of the foot causes other problems. The ligaments between the bones are contracted, or shortened. The joints between the tarsal bones do not move as they should. The bones themselves are deformed. This results in a very tight stiff foot that cannot be placed flat on the ground for walking. To walk, the child must walk on the outside edge of the foot rather than on the sole of the foot.

During the nine months of pregnancy, the fetus undergoes remarkable changes. In the skeleton, these changes include the separation of each individual bone in the body from one mass of bone material. In some cases, this process is flawed. A clubfoot occurs when this type of failure of separation occurs in the tarsal bones of the foot.

Until recently, most experts believed that the deformity was due to the foot being stuck in the wrong position in the womb. As development progressed, the foot could not grow normally because it was turned under and held in that position. Today, most information suggests that clubfoot is hereditary, meaning that it runs in families. It is not clear what genetic defect causes the problem. It is not known yet whether the defect affects the development of the muscles, blood vessels, or bones of the foot. 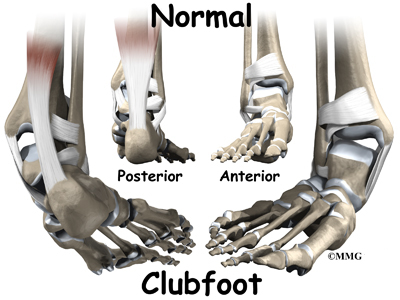 The foot is an incredibly complex structure. To grow and develop correctly, all of the bones of the foot must move normally in relationship to each other. If the movement between two bones is abnormal, or non-existent, that changes how the bones grow after birth. If untreated, over time this leads to more deformity in the foot. 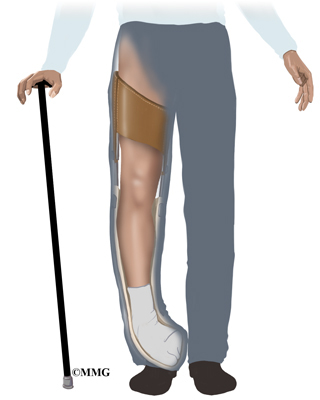 The primary problem of a clubfoot is that the foot can not be placed flat on the ground so that the child can walk on the sole of the foot. The condition is not painful to the child. In developing countries where there is sometimes no treatment for conditions such as this, adults with clubfoot walk on the side of their foot. They do not walk normally. The foot is extremely deformed with calluses where the foot contacts the ground. Shoe wear is very difficult to fit and usually must be custom made. Normal shoes will not fit.

Eventually the abnormality can lead to wear and tear arthritis in the abnormal joints, pain, and decreased ability to walk.

The history and physical examination make the diagnosis of clubfoot. The appearance alone is usually enough to make the diagnosis. A complete examination of the newborn is critical, since there are other genetic conditions that are associated with clubfeet. Your pediatrician will perform a complete evaluation to make sure there are no other congenital conditions to be concerned with.

A clubfoot can be diagnosed before birth using ultrasound. Many women have routine ultrasound test to assess the status of the pregnancy. When a clubfoot is found, there is no treatment currently available before birth. Because clubfoot is associated with other serious congenital and genetic abnormalities, the obstetrician may recommend amniocentesis to look for genetic problems in the fetus. An amniocentesis is a test where a needle is inserted into the uterus and a small amount of fluid removed. This
fluid is sent to the lab for analysis. If evidence for serious genetic or congenital anomalies are found, then the option of terminating the pregnancy exists.

X-rays are helpful in determining the severity of the condition. This information may become important later in trying to decide what treatment is best to recommend. Usually, no other imaging studies are needed.

Treatment for clubfoot usually starts at birth. Treatment in the majority of infants will require both non-surgical treatment and surgery.

The most commonly used treatment in the newborn and infant is manipulation and casting. This is started as soon as possible. The foot is manipulated to stretch and loosen the tight structures. The foot is then placed in a cast to hold it in a corrected position. This is repeated every one or two weeks until the deformity is corrected or surgery is performed. 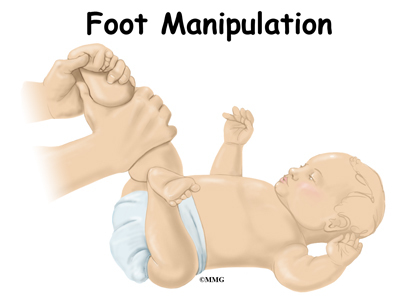 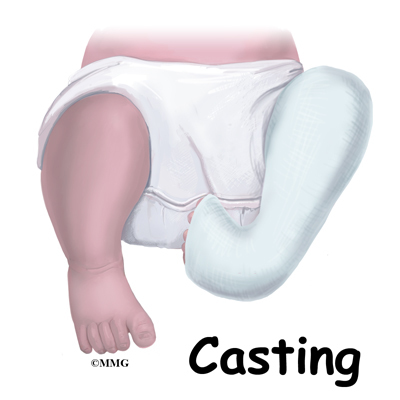 As any parent knows, the newborn grows rapidly after birth. The technique of manipulation and casting the foot is used to guide the growth of the foot towards the normal alignment. Without this guidance, the foot will remain deformed and may actually get worse. The greatest chance for correction of deformity occurs early in life when there is so much growth occurring.

There have been many different techniques proposed for the way the foot is manipulated and the way the casts are applied. Treatment of the infant with clubfoot is definitely one of the arts of medicine. Successful treatment requires patience and attention to detail.

When it is clear that manipulation and casting alone will not result in success, surgery will be recommended by your surgeon. The main question is when to perform the surgery. The earlier the surgery is performed, the more growth remains in the foot. The more growth remaining, the more the deformity can be corrected. But, a smaller foot is much harder to operate on effectively. The surgery is much harder and the risk of damage to the nerves, blood vessels, and bones is much higher.

Most surgeons recommend waiting until the foot is about eight cm (three inches) long. This usually occurs when the infant is about nine months old. Most surgeons agree that it is ideal to have the surgery over and healed before the infant starts to try and walk. Surgery performed at nine months usually will accomplish this as well. 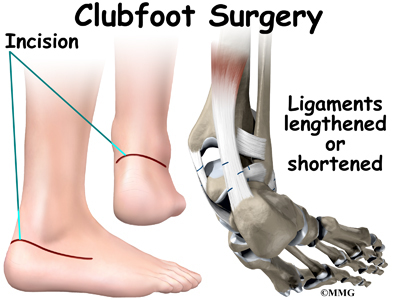 The surgical procedure is tedious and complex, but the goals are always the same. Your surgeon will find and cut all the ligaments that are too tight. Ligaments are the connective tissues that connect bones to bones. When they are cut, they eventually heal back with scar tissue. In the growing infant, this scar tissue will grow back to form new ligaments that are not so tight. 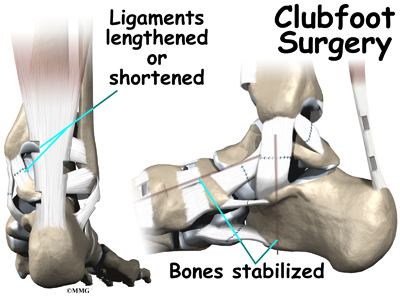 Once the ligaments have been loosened, your surgeon can align the bones of the foot as normal as possible. Metals pins are commonly used to hold the bones in the proper alignment. These metals pins stick out through the skin and are removed three to six weeks after the surgery is completed.

What should be expected from treatment?

All treatment, both surgical or non-surgical, is designed to give the child a foot that can be placed flat on the floor. The foot will never be normal, but treatment can provide a very functional foot that can be used for walking without pain. If surgery is required, the goal is to have the foot healed by the time the child is starting to walk.

After surgery for clubfoot, a large bandage is applied to the foot. Some type of cast or brace may also be used. The child will probably need to wear some type of brace for several months – and maybe even years after the surgery – but ideally, the treatment should not interfere with the normal developmental milestones. Once the surgery is over, mother nature takes over. Weightbearing will help guide the growth in the foot towards a more functional orientation where the sole of the foot can be placed flat on the floor.

What can go wrong?

Several complications are possible both during and after surgery. Wound problems may occur after surgery due to abnormal swelling or pressure from the cast. When the foot is markedly deformed, correction of the deformity may stretch the skin so tight that the blood supply is compromised. This may result in a small section of the skin actually dying. This normally heals with time and only rarely does this require a skin graft.

The infant foot is very small. The structures are very difficult to see even using magnifying glasses. Blood vessels and nerves may be damaged or cut during the operation. The bones of the infant foot are mostly made of cartilage. This material can be damaged, resulting in deformities of these bones. This damage usually corrects itself with growth.

Up to half of all patients undergoing clubfoot surgery will require at least one additional surgical procedure later in life.