A Patient’s Guide to Cervical Discectomy 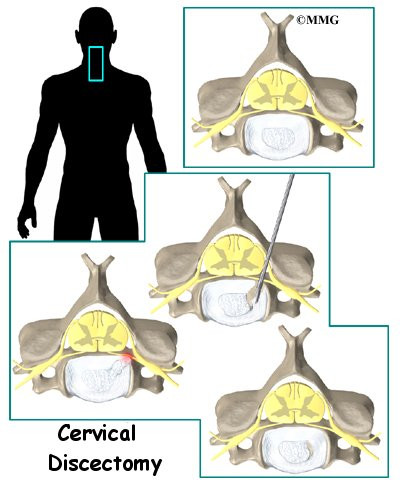 Cervical discectomy is surgery to remove one or more discs from the neck. The disc is the pad that separates the neck vertebrae; ectomy means to take out. Usually a discectomy is combined with a fusion of the two vertebrae that are separated by the disc. In some cases, this procedure is done without a fusion. A cervical discectomy without a fusion may be suggested for younger patients between 20 and 45 years old who have symptoms due to a herniated disc.

What parts of the neck are involved?

Surgeons usually perform this procedure through the front of the neck. This is called the anterior neck region. Key structures include ligaments, bones, intervertebral discs, spinal cord, spinal nerves and the neural foramina. 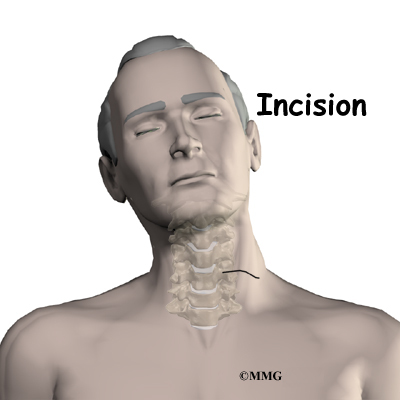 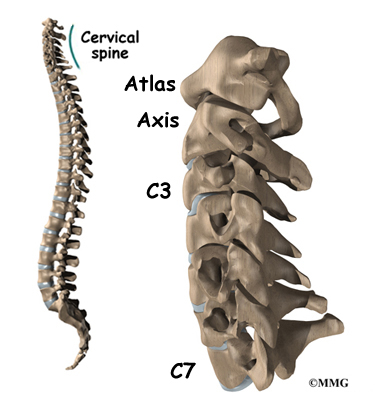 Surgery is occasionally done through the back, or posterior region, of the neck. Important structures in this area include the ligaments and bones, especially the lamina bones.

What do surgeons hope to achieve? 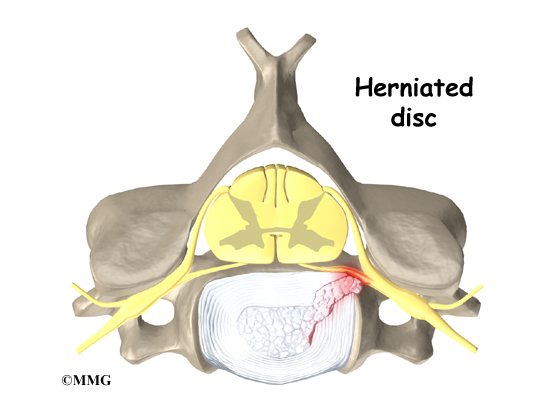 Discectomy is used to alleviate symptoms of a herniated disc. A disc herniation happens when the nucleus inside the center of the disc pushes through the annulus, the ligaments surrounding the nucleus. The herniated disc material may push outward, causing pain. Numbness or weakness in the arm occurs when the nucleus pushes on the spinal nerve root. Of greater concern is a condition in which the nucleus herniates straight backward into the spinal cord, called a central herniation. Discectomy relieves pressure on the ligaments, nerves, or spinal cord.

Discectomy is also commonly used when the surgeon plans to fuse the bones of two neck vertebrae into one solid bone. Most surgeons will take the disc out and replace the empty space with a block of bone graft, a procedure called cervical fusion.

Discectomy alone is usually only used for younger patients (20 to 45 years old) whose symptoms are from herniation of the disc. But some surgeons think discectomy should always be combined with fusion of the bones above and below. They are concerned that the empty space where the disc was removed may eventually collapse and fill in with bone. Inserting a bone block during fusion surgery helps keep pressure off the spinal nerves because the graft widens the neural foramina. The neural foramina are openings on each side of the vertebrae where nerves exit the spinal canal. Most research on discectomy by itself shows good short-term benefits compared to discectomy with fusion. But more information is needed about whether the long-term results are equally as good.

How will I prepare for surgery?

The decision to proceed with surgery must be made jointly by you and your surgeon. You should understand as much about the procedure as possible. If you have concerns or questions, you should talk to your surgeon.

Once you decide on surgery, your surgeon may suggest a complete physical examination by your regular doctor. This exam helps ensure that you are in the best possible condition to undergo the operation.

On the day of your surgery, you will probably be admitted to the hospital early in the morning. You shouldn’t eat or drink anything after midnight the night before.

Patients are given a general anesthesia to put them to sleep during most spine surgeries. As you sleep, your breathing may be assisted with a ventilator. A ventilator is a device that controls and monitors the flow of air to the lungs.

The patient’s neck is positioned facing the ceiling with the head bent back and turned slightly to the right. A two-inch incision is made two to three fingers’ width above the collar bone across the left-hand side of the neck. The left side is chosen to avoid injuring the nerve going to the voice box. Retractors are used to gently separate and hold the neck muscles and soft tissues apart so the surgeon can work on the front of the spine.

A needle is inserted into the herniated disc, and an X-ray is taken to identify and confirm it is the correct disc. A long strip of muscle and the anterior longitudinal ligament that cover the front of the vertebral bodies are carefully pulled to the side. Forceps are used to take out the front half of the disc. Next a small rotary cutting tool (a burr) is used to carefully remove the back half of the disc. A surgical microscope is used to help the surgeon see and remove pieces of disc material and any bone spurs that are near the spinal cord.

The muscles and soft tissues are put back in place, and the skin is stitched together.

This method is used when the herniated disc has fragmented into small pieces near the spinal nerve.

The operation is usually done with the patient lying face down with the neck bent forward and held in a headrest. The surgeon makes a short incision down the center of the back of the neck. The skin and soft tissues are separated to expose the bones along the back of the spine. 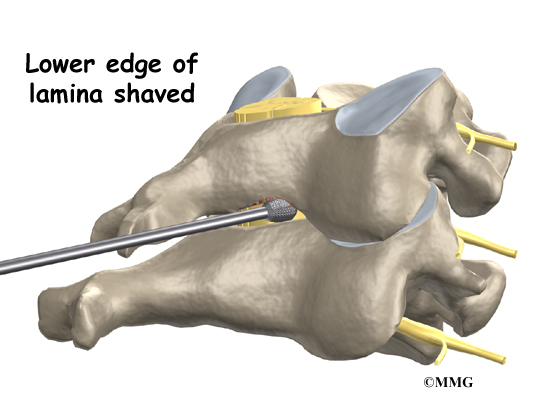 Then the surgeon may use an X-ray to identify the injured disc. A burr is used to shave the edge off the lamina bones, the back part of the ring over the spinal cord. When the disc has jutted straight backward into the spinal cord (central herniation), surgeons may need to completely remove both lamina bones in order to see better and to be able to clear all the pieces of the disc near the spinal cord. 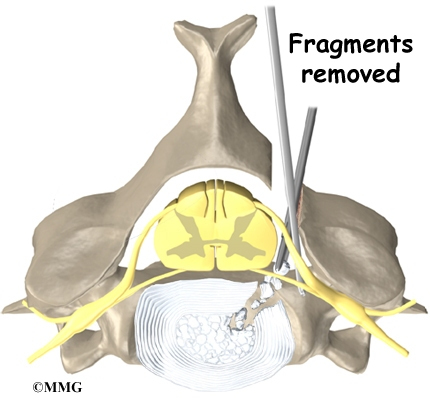 The muscles and soft tissues are put back in place, and the skin is stitched together.

As with all major surgical procedures, complications can occur. Some of the most common complications following discectomy include

This is not intended to be a complete list of the possible complications, but these are the most common.

Thrombophlebitis, sometimes called deep venous thrombosis (DVT), can occur after any operation. It occurs when the blood in the large veins of the leg forms blood clots. This may cause the leg to swell and become warm to the touch and painful. If the blood clots in the veins break apart, they can travel to the lung, where they lodge in the capillaries and cut off the blood supply to a portion of the lung. This is called a pulmonary embolism. (Pulmonary means lung, and embolism refers to a fragment of something traveling through the vascular system.) Most surgeons take preventing DVT very seriously. There are many ways to reduce the risk of DVT, but probably the most effective is getting you moving as soon as possible. Two other commonly used preventative measures include

Infection following spine surgery is rare but can be a very serious complication. Some infections may show up early, even before you leave the hospital. Infections on the skin’s surface usually go away with antibiotics. Deeper infections that spread into the bones and soft tissues of the spine are harder to treat and may require additional surgery to treat the infected portion of the spine. 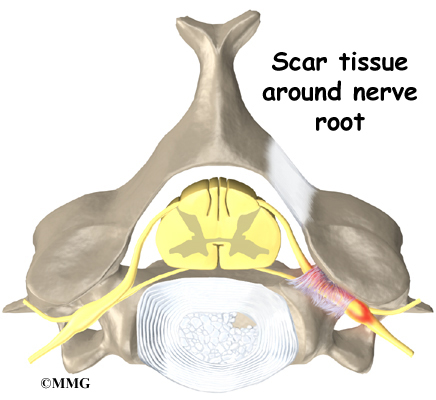 Any surgery that is done near the spinal canal can potentially cause injury to the spinal cord or spinal nerves. Injury can occur from bumping or cutting the nerve tissue with a surgical instrument, from swelling around the nerve, or from the formation of scar tissue. An injury to these structures can cause muscle weakness and a loss of sensation to the areas supplied by the nerve.

The nerve to the voice box is sometimes injured during surgery on the front of the neck. When doing anterior neck surgery, surgeons prefer to go through the left side of the neck where the path of the nerve to the voice box is more predictable than on the right side. During surgery, the nerve may get stretched too far when retractors are used to hold the muscles and soft tissues apart. When this happens, patients may be hoarse for a few days or weeks after surgery. In rare cases where the nerve is actually cut, patients may end up with ongoing minor problems of hoarseness, voice fatigue, or difficulty making high tones.

Many patients get nearly complete relief of symptoms from the discectomy procedure. As with any surgery, however, you should expect some pain afterward. If the pain continues or becomes unbearable, talk to your surgeon about treatments that can help control your pain.

What happens after surgery?

Patients are usually able to get out of bed within an hour or two after surgery. Your surgeon may have you wear a hard or soft neck collar. If not, you will be instructed to move your neck only carefully and comfortably.

Most patients leave the hospital the day after surgery and are safe to drive within a week or two. People generally get back to light work by four weeks and can do heavier work and sports within two to three months.

Outpatient physical therapy is usually prescribed only for patients who have extra pain or show significant muscle weakness and deconditioning.

Patients usually don’t require formal rehabilitation after routine cervical discectomy surgery. Surgeons may prescribe a short period of physical therapy when patients have lost muscle tone in the shoulder or arm, when they have problems controlling pain, or when they need guidance about returning to heavier types of work.

If you require outpatient physical therapy, you will probably only need to attend therapy sessions for two to four weeks. You should expect full recovery to take up to three months.

Active treatments are added slowly. These include exercises for improving heart and lung function. Walking, stationary cycling, and arm cycling are ideal cardiovascular exercises. Therapists also teach specific exercises to help tone and control the muscles that stabilize the neck and upper back.

Your therapist works with you on how to move and do activities. This form of treatment, called body mechanics, is used to help you develop new movement habits. This training helps you keep your neck in safe positions as you go about your work and daily activities. You’ll learn how to keep your neck safe while you lift and carry items and as you begin to do other heavier activities.

Before your therapy sessions end, your therapist will teach you a number of ways to avoid future problems.