A Patient’s Guide to Bunions 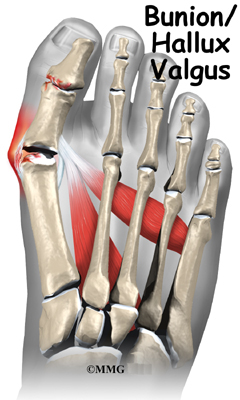 Hallux valgus is a condition that affects the joint at the base of the big toe. The condition is commonly called a bunion. The bunion actually refers to the bump that grows on the side of the first metatarsophalangeal (MTP) joint. In reality, the condition is much more complex than a simple bump on the side of the toe. Interestingly, this condition almost never occurs in cultures that do not wear shoes. Pointed shoes, such as high heels and cowboy boots, can contribute to the development of hallux valgus. Wide shoes, with plenty of room for the toes, lessen the chances of developing the deformity and help reduce the irritation on the bunion if you already have one.

The term hallux valgus actually describes what happens to the big toe. Hallux is the medical term for big toe, and valgus is an anatomic term that means the deformity goes in a direction away from the midline of the body. So in hallux valgus the big toe begins to point towards the outside of the foot. As this condition worsens, other changes occur in the foot that increase the problem. 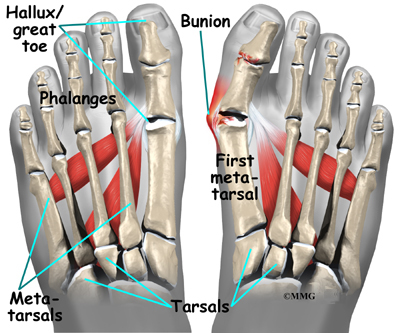 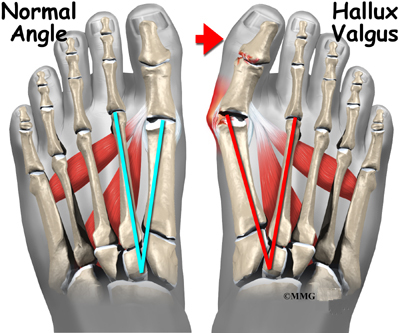 One of those changes is that the bone just above the big toe, the first metatarsal, usually develops too much of an angle in the other direction. This condition is called metatarsus primus varus. Metatarsus primus means first metatarsal, and varus is the medical term that means the deformity goes in a direction towards the midline of the body. This creates a situation where the first metatarsal and the big toe now form an angle with the point sticking out at the inside edge of the ball of the foot. The bunion that develops is actually a response to the pressure from the shoe on the point of this angle. At first the bump is made up of irritated, swollen tissue that is constantly caught between the shoe and the bone beneath the skin. As time goes on, the constant pressure may cause the bone to thicken as well, creating an even larger lump to rub against the shoe.

Many problems that occur in the feet are the result of abnormal pressure or rubbing. One way of understanding what happens in the foot due to abnormal pressure is to view the foot simply. Our simple model of a foot is made up of hard bone covered by soft tissue that we then put a shoe on top of. Most of the symptoms that develop over time are because the skin and soft tissue are caught between the hard bone on the inside and the hard shoe on the outside. 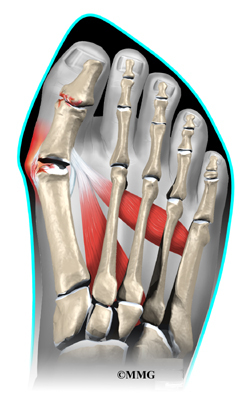 Any prominence, or bump, in the bone will make the situation even worse over the bump. Skin responds to constant rubbing and pressure by forming a callus. The soft tissues underneath the skin respond to the constant pressure and rubbing by growing thicker. Both the thick callus and the thick soft tissues under the callus are irritated and painful. The answer to decreasing the pain is to remove the pressure. The pressure can be reduced from the outside by changing the pressure from the shoes. The pressure can be reduced from the inside by surgically removing any bony prominence.

The symptoms of hallux valgus usually center on the bunion. The bunion is painful. The severe hallux valgus deformity is also distressing to many and becomes a cosmetic problem. Finding appropriate shoe wear can become difficult, especially for women who want to be fashionable but have difficulty tolerating fashionable shoe wear. Finally, increasing deformity begins to displace the second toe upward and may create a situation where the second toe is constantly rubbing on the shoe.

Diagnosis begins with a careful history and physical examination by your doctor. This will usually include a discussion about shoe wear and the importance of shoes in the development and treatment of the condition. X-rays will probably be suggested. This allows your doctor to measure several important angles made by the bones of the feet to help determine the appropriate treatment.

Treatment of hallux valgus nearly always starts with adapting shoe wear to fit the foot. In the early stages of hallux valgus, converting from a shoe with a pointed toe to a shoe with a wide forefoot (or toe box) may arrest the progression of the deformity. Since the pain that arises from the bunion is due to pressure from the shoe, treatment focuses on removing the pressure that the shoe exerts on the deformity. Wider shoes reduce the pressure on the bunion. Bunion pads may reduce pressure and rubbing from the shoe. There are also numerous devices, such as toe spacers, that attempt to splint the big toe and reverse the deforming forces.

In some very mild cases of bunion formation, surgery may only be required to remove the bump that makes up the bunion. This operation, called a bunionectomy, is performed through a small incision on the side of the foot immediately over the area of the bunion. Once the skin is opened the bump is removed using a special surgical saw or chisel. The bone is smoothed of all rough edges and the skin incision is closed with small stitches. 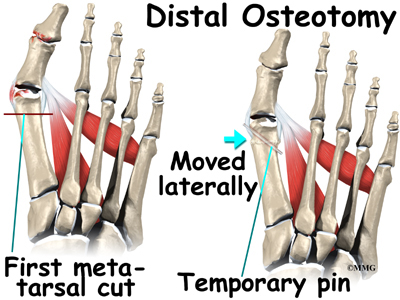 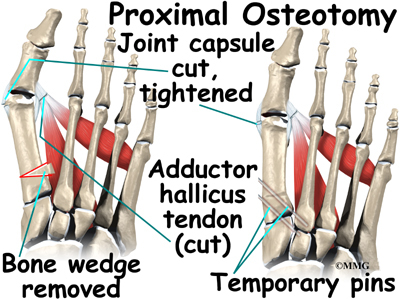 When a surgeon cuts and repositions a bone, it is referred to as an osteotomy. There are two basic techniques used to perform an osteotomy to realign the first metatarsal.

In some cases, the far end of the bone is cut and moved laterally (called a distal osteotomy). This effectively reduces the angle between the first and second metatarsal bones. This type of procedure usually requires one or two small incisions in the foot. Once the surgeon is satisfied with the position of the bones, the osteotomy is held in the desired position with one, or several, metal pins. Once the bone heals, the pin is removed. The metal pins are usually removed between three and six weeks following surgery. 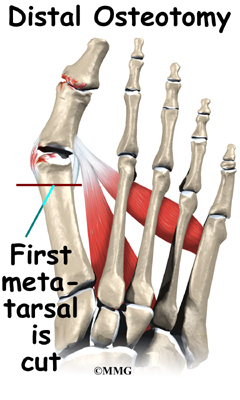 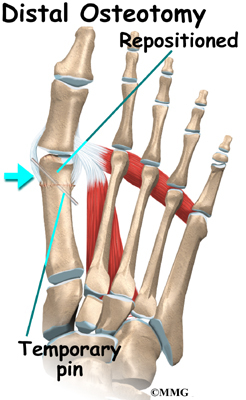 In other situations, the first metatarsal is cut at the near end of the bone (called a proximal osteotomy. This type of procedure usually requires two or three small incisions in the foot. Once the skin is opened the surgeon performs the osteotomy. The bone is then realigned and held in place with metal pins until it heals. Again, this reduces the angle between the first and second metatarsal bones. 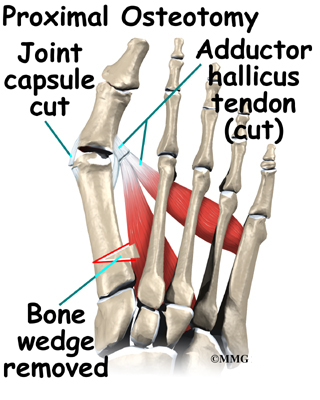 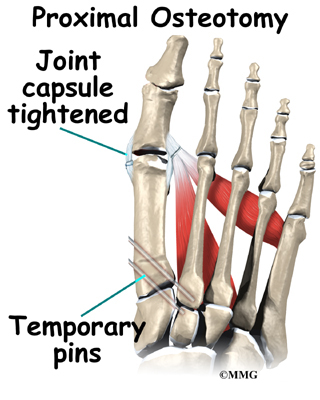 Realignment of the big toe is then done by releasing the tight structures on the lateral, or outer, side of the first MTP joint. This includes the tight joint capsule and the tendon of the adductor hallucis muscle. This muscle tends to pull the big toe inward. By releasing the tendon, the toe is no longer pulled out of alignment. The toe is realigned and the joint capsule on the side of the big toe closest to the other toe is tightened to keep the toe straight, or balanced.

Once the surgeon is satisfied that the toe is straight and well balanced, the skin incisions are closed with small stitches. A bulky bandage is applied to the foot before you are returned to the recovery room.

What can I expect following treatment?

Patients with a painful bunion may benefit from four to six physical therapy treatments. Your therapist can offer ideas of shoes that have a wide toe box (mentioned earlier). The added space in this part of the shoe keeps the metatarsals from getting squeezed inside the shoe. A special pad can also be placed over the bunion. Foot orthotics may be issued to support the arch and hold the big toe in better alignment.

These changes to your footwear may allow you to resume normal walking immediately, but you should probably cut back on more vigorous activities for several weeks to allow the inflammation and pain to subside.

Treatments directed to the painful area help control pain and swelling. Examples include ultrasound, moist heat, and soft-tissue massage. Therapy sessions sometimes include iontophoresis, which uses a mild electrical current to push anti-inflammatory medicine to the sore area. This treatment is especially helpful for patients who can’t tolerate injections.

It will take about eight weeks before the bones and soft tissues are well healed. You may be placed in a wooden-soled shoe or a cast during this period to protect the bones while they heal. You will probably need crutches briefly after surgery, and a physical therapist may be consulted to help you use your crutches.

You will probably wear a bandage or dressing for about a week following the procedure. The stitches are generally removed in 10 to 14 days. However, if your surgeon chose to use sutures that dissolve, you won’t need to have the stitches taken out.

During your follow-up visits, X-rays will probably be taken so that the surgeon can follow the healing of the bones and determine how much correction has been achieved.