A Patient’s Guide to Avascular Necrosis of the Hip 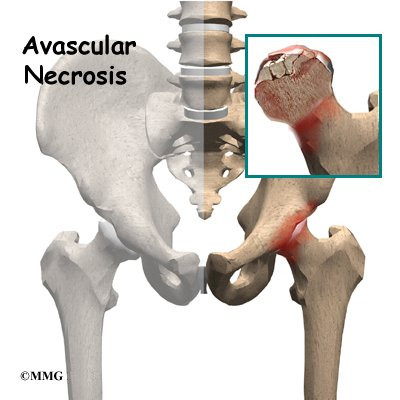 Bones are living tissue, and like all living tissue they rely on blood vessels to bring blood to keep them alive. Most living tissues have blood vessels that come from many directions into the tissue. If one blood vessel is damaged it may not cause problems, since there may be a backup blood supply coming in from a different direction. But certain joints of the body have only a few blood vessels that bring in blood. One of these joints is the hip. This document will describe what happens when this blood supply is damaged and results in what is called avascular necrosis (AVN) of the hip. Another name for this condition is osteonecrosis (which means “bone death”).

Where does AVN develop?

The hip joint is one of the true ball-and-socket joints of the body. The hip socket is called the acetabulum and forms a deep cup that surrounds the ball of the upper thigh bone. The thigh bone itself is called the femur, and the ball on the end is the femoral head. Thick muscles of the buttock at the back and the thick muscles of the thigh in the front surround the hip. 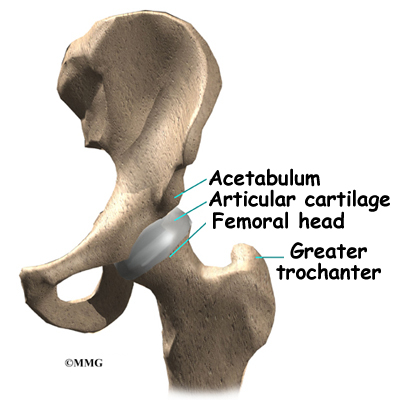 The surface of the femoral head and the inside of the acetabulum are covered with articular cartilage. This material is about one-quarter of an inch thick in most large joints. Articular cartilage is a tough, slick material that allows the surfaces to slide against one another without damage. 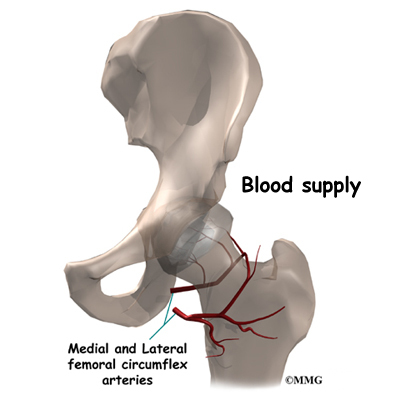 Living bone is always changing. To maintain a bone’s strength, bone cells are constantly repairing the wear and tear that affects the bone tissue. If this process stops the bone can begin to weaken, just like rust can affect the metal structure of a bridge. Eventually, just like a rusty bridge, the bone structure begins to collapse. 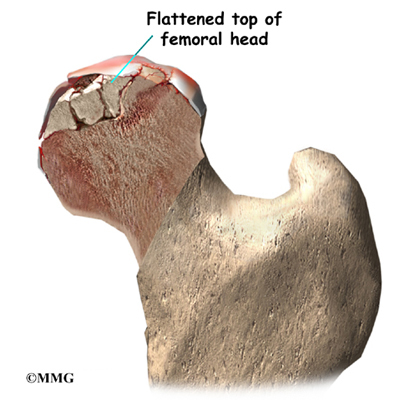 When AVN occurs in the hip joint, the top of the femoral head (the ball portion) collapses and begins to flatten. This occurs because this is where most of the weight is concentrated. The flattening creates a situation where the ball no longer fits perfectly inside the socket. Like two pieces of a mismatched piece of machinery, the joint begins to wear itself out. This leads to osteoarthritis of the hip joint, and pain.

Related Document: A Patient’s Guide to Osteoarthritis of the Hip

There are many causes of AVN. Anything that damages the blood supply to the hip can cause AVN.

Some medications are known to cause AVN. Corticosteroids (cortisone) such as prednisone or methylprednisolone are the most common drugs known to lead to AVN. This is usually only a problem in patients who must take cortisone every day due to other diseases, such as advanced arthritis, or to prevent rejection of an organ transplant.

Sometimes there is no choice, and cortisone has to be prescribed to treat a condition, knowing full well that AVN could occur. AVN has not been proven to be caused by local injection with cortisone, such as one or two injections into joints to treat arthritis or bursitis. But some patients have developed AVN within the first month of taking these drugs orally (pills by mouth). Patients taking both corticosteroids and statin drugs (cholesterol-lowering medications) seem to have the greatest risk for developing femoral head osteonecrosis.

A clear link exists between AVN and lifestyle choices such as smoking and alcohol abuse . Smoking causes blood vessels to constrict or narrow thereby limiting the amount of blood flow to an area such as the hip with its already limited backup supply. Excessive alcohol intake somehow damages the blood vessels and leads to AVN. Deep sea divers and miners who work under great atmospheric pressures also are at risk for damage to the blood vessels. The pressure causes tiny bubbles to form in the blood stream which can block the blood vessels to the hip, damaging the blood supply.

Then there is a long list of other diseases and conditions that are associated with increased incidence of femoral head osteonecrosis. These are referred to as nontraumatic causes. For example, there is a link between osteonecrosis and more commonly known problems like leukemia, sickle cell diseases, and HIV infection and less well-known diseases such as Gaucher disease, hyperuricemia (a condition commonly called “gout”), and Caisson’s disease.

The first symptom of AVN is pain when weight is placed on the hip. The pain can be felt in the groin area, the buttock area, and down the front of the thigh. As the problem progresses, the symptoms include development of a limp when walking and stiffness in the hip joint. Eventually, the pain will also be present at rest and may even interfere with sleep.

The diagnosis of AVN begins with a history and physical examination. Your doctor will want to know about your occupation, what other medical problems you have, and your medication use. You’ll be asked whether you drink alcohol. A physical examination will be done to determine how much stiffness you have in the hip and whether you have a limp. Once this is done, X-rays will most likely be ordered.

X-rays will usually show AVN if it has been present for long enough. In the very early stages, it may not show up on X-rays even though you are having pain. In the advanced stages, the hip joint will be very arthritic, and it may be hard to tell whether the main problem is AVN or advanced osteoarthritis of the hip. Either way, the treatment is basically the same.

If the X-rays fail to show AVN, you may have a bone scan done to determine if the pain in your hip is coming from early AVN. A bone scan involves injecting tracers into your blood stream. Several hours later, a large camera is used to take a picture of the bone around the hip joint. If there is no blood supply to the femoral head, the picture will show a blank spot where the femoral head should be outlined on the film.

The bone scan has pretty much been replaced with magnetic resonance imaging (MRI) today. The MRI scan is probably the most common test used to look for AVN of the hip. The MRI scanner uses magnetic waves instead of radiation. Multiple pictures of the hip bones are taken by the MRI scanner. The images look like slices of the bones. The MRI scan is very sensitive and can show even small areas of damage to the blood supply of the hip, even just hours after the damage has occurred.

Your surgeon will use these imaging studies in order to plan the best treatment approach for you. He or she will look at where the damage has occurred, the size of any lesions, whether or not there has been any collapse of the bone, and if any arthritic changes have developed. Based on these findings, the condition will be classified as either mild, moderate, or severe.

Once AVN has occurred, the treatment choices are determined by how far along the problem is and your symptoms. Other factors that guide treatment decisions include your age, activity level, general health (and any specific health problems present), and life expectancy. For example, patients with other serious health problems or with a limited life expectancy might be treated with nonoperative care. While the symptoms may be reduced with pain medications and anti-inflammatory medications, no medical treatments will restore the blood supply to the femoral head and reverse the AVN.

If AVN is caught early, keeping weight off the sore-side foot when standing and walking may be helpful. Patients are shown how to use a walker or crutches to protect the hip. The idea is to permit healing and to prevent further damage to the hip. Patients may be shown stretches to avoid a loss of range of motion in the hip.

Anti-inflammatory medicine is often used to ease pain. Bisphosphonates are another group of medications that can be helpful. One particular bisphosphonate (Fosamax normally used for the treatment of osteoporosis) has been shown effective in reducing the risk of femoral head collapse in patients with avascular necrosis. In some cases, surgeons also prescribe biophysical treatment modalities such as electrical stimulation or shock wave therapy in an attempt to get the bone to heal. Sometimes these measures may help delay the need for surgery, but they rarely reverse the problem.

If the femoral head has not begun to collapse, your surgeon may suggest an operation to try to increase the blood supply to the femoral head. Several operations have been designed to do this. 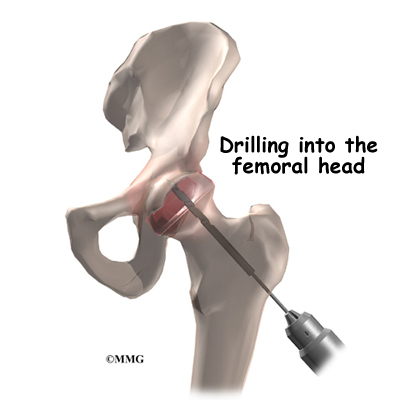 Decompression is often accompanied by the use of bone grafts with or without growth factors, a procedure designed to stimulate bone growth at the site of the defect. The donated bone comes from the patient (taken from the pelvic bone or lower leg). The bone is crushed up into tiny pieces and applied to the hole or defect caused by the necrotic process.

The decompression operation (with or without bone grafting) is done through a very small incision in the side of the thigh. The surgeon watches on a fluoroscope as a drill is used. A fluoroscope is a type of X-ray that shows the bones on a TV screen. The surgeon uses the fluoroscope to guide the drill where it needs to go. This operation is usually done as an outpatient procedure, and you will be able to go home with crutches the same day. 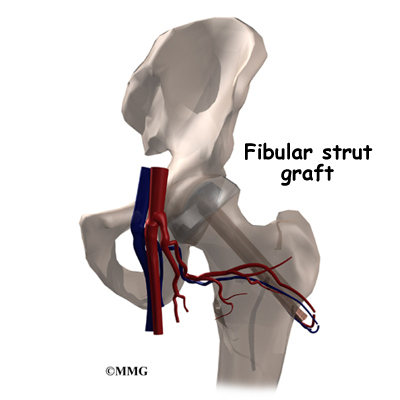 This is a very complicated operation and is not commonly done. It is not always successful because the blood supply to the graft is fragile and may not form completely.

In cases of small lesions involving less than one-third of the surface of the femoral head, rotational osteotomy has been very successful. The procedure involves making a cut through the bone and turning the head of the femur so that the necrotic bone is no longer bearing any weight. 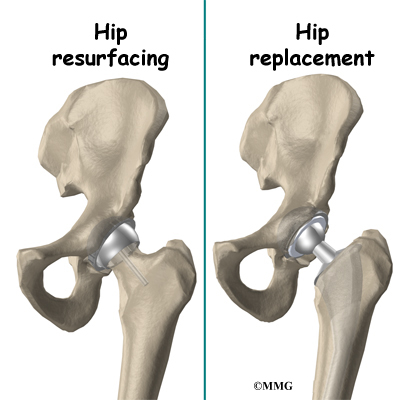 When AVN is in the advanced stages, the condition is no different from osteoarthritis of the hip joint. Your surgeon will probably recommend replacing the hip with an artificial hip joint. For those patients with a limited bone defect that only affects the femoral head and does not extend into the hip socket, a resurfacing procedure might be considered. Hip resurfacing arthroplasty is a type of hip replacement that replaces the arthritic surface of the joint but removes far less bone than the traditional total hip replacement.

Related Document: A Patient’s Guide to Artificial Joint Replacement of the Hip

What should I expect following treatment?

You may work with a physical therapist who will show you ways to safely move and stretch your hip. The goal is to keep your hip mobile and to avoid losing range of motion. Your therapist will also instruct you to use a walker or crutches. Keeping weight off your hip while you are standing or walking may help the bone to heal while protecting the femur from further damage.

After a simple drilling operation, you will probably use crutches for six weeks or so. The drill holes weaken the bone around the hip, making it possible to fracture the hip. Using crutches allows the bone to heal safely and reduce the risk that you may fracture your hip. Patients who have had bone and blood vessels grafted are required to limit how much weight they place on the hip for up to six months.

When you are safe in putting full weight through the leg, your doctor may have you work with a physical therapist to help regain hip range of motion and strength.