A Patient’s Guide to Arthroscopy 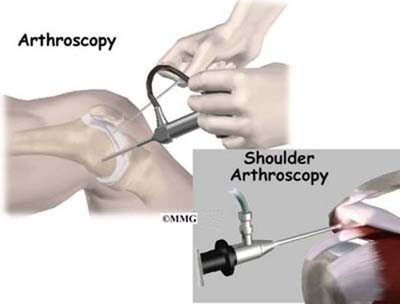 Until recently, surgery on the inside of any joint meant making a large incision and opening the joint to do even the most minor procedure. Twenty years ago, fiber optics began changing all that and is continuing to change how orthopedic surgeons operate on joints in the body.

The term arthroscopy basically means to look into the joint. (Arthro means joint, and scopy means look.) So the common phrase scope the joint means to insert an arthroscope into the joint and have a look. In the early days before the development of miniature video cameras, about all the surgeon could do was take a look.

Over the past several years, the development of very small video cameras and specialized instruments have allowed surgeons to do more than simply take a look into the joint. The arthroscope is now used more and more for actual surgical procedures.

How is it used?

Why is it better?

All surgical procedures that are done result in damage to tissues that are otherwise normal, because an incision must be made to see the problem. This is particularly bothersome for joints because to enter a joint, the joint capsule and ligaments must be incised (cut into). For minor surgical procedures inside the joint, it is not unusual for the recovery time to be much longer. This is because the normal tissues that were cut must also heal. Also, large incisions into the joint to perform surgical procedures increase the chances for infection. Long procedures where the joint is open to the air can lead to injury to the articular cartilage (the smooth surface of all joints) because it dries the cartilage out.

Arthroscopy causes less damage to normal structures by requiring much smaller incisions through the joint capsule and ligaments around the joint. Arthroscopy also allows the joint to remain closed and reduces the risk of infection and drying out of the articular cartilage. Because of this, the healing time for most arthroscopic procedures is greatly reduced. Rehabilitation is faster, and unnecessary damage to normal structures is avoided.

Arthroscopy has also greatly expanded orthopedic surgeon’s understanding of problems around the joints. In many cases, conditions which were completely unknown before the invention of the arthroscope have been discovered and are now being treated very effectively with arthroscopic surgery.

What joints are being scoped?

Just about every joint in the body has been scoped, but the vast majority of surgical procedures done with the arthroscope are done on the knee and the shoulder. The knee was the primary site of arthroscopic procedures in the early days of arthroscopy and continues to be a common target of the scope.

Probably the most common use of the arthroscope initially was to remove loose bodies from the knee joint or to remove a torn cartilage or torn meniscus. A loose body is a fragment of bone or cartilage that moves around inside the joint and can get caught between the two bones of the joint and cause pain. The menisci (or cartilages) of the knee are two small pieces of tissue that sit between the two bones of the knee joint and act similar to a gasket. A torn meniscus is a common problem that involves these structures and can get caught between the knee and cause pain.

Very complex surgical procedures are now done inside the knee with the aid of the arthroscope. For example, the anterior and posterior cruciate ligaments inside the knee are now almost always reconstructed without opening the knee joint. The procedure is done by using the arthroscope to help see where to drill holes in the bone and to place the ligament graft. Even fractures that involve the joint surface of the lower leg bone (the tibia) are being fixed by watching the fracture through the arthroscope while screws are inserted through small incisions in the skin–a procedure that once required a large incision into the joint.

Other common joints that may be treated with arthroscopy include the ankle, wrist, elbow, and hip.

What goes on during an arthroscopy?

Your doctor will meet with you to explain what the surgery is intending to accomplish and what you can expect. You will be asked to sign a surgical consent form that describes the operation and the potential risks. It is a record that you understand the procedure. If you have any questions, now is the time to ask.

You will also need to review your other medical problems with the doctor in case you have a medical problem that will require evaluation before surgery. If you have serious lung or heart problems, you may need to see your family physician to get medical clearance before the procedure.

Most arthroscopic surgical procedures are done on an outpatient basis, which means you will probably be able to go home the same day. (Some arthroscopically assisted procedures still require larger incisions to be made around the joint, and these larger procedures may require a night or two stay in the hospital.) Generally, you are asked to not eat or drink anything after midnight on the evening before surgery. If you commonly take medications in the morning, ask your doctor whether you should take them or not.

There are many different types of anesthesia that can be done, depending on your wishes, your doctor’s recommendations, and, of course, which joint is involved. In general, anesthesia may be local, regional, or general. Each of these types of anesthesia has advantages and disadvantages, but all are quite safe.

Regional anesthesia is probably the most common type used for arthroscopy. It is often referred to as a block (for example, a spinal block). The block is done by injecting lidocaine around the nerves that go to an extremity (in a spinal block, these are the nerves that go to the legs). The advantages to this type of anesthesia are that it does not affect the function of the lungs (a concern if you have lung problems). It does not cause as much nausea as general anesthesia, and it is relatively safer than general anesthesia. You are also awake and can watch the procedure on the TV monitor. The disadvantages are that it takes longer to take affect than going to sleep, and the actual block involves an injection–which may be uncomfortable for a short period of time.

General anesthesia is commonly referred to as going to sleep. It is commonly used for arthroscopic procedures–especially procedures which may be long and complicated. The advantages of general anesthesia are that you are not aware of anything that occurs during surgery. The disadvantages are that you may have a hangover with nausea and vomiting due to the drugs used, and you may have a higher risk of lung problems after surgery.

Once the anesthesia is working, the operating room nurses and your doctor will prepare the equipment for arthroscopy. There are lots of electronics and equipment that need to be assembled. The surgical limb will be positioned to make it easier for the surgeon to do the surgery. If the procedure is going to be done on the knee, ankle, elbow, or wrist, a tourniquet may be used to stop the blood flow temporarily during the procedure. This makes it easier to see inside the joint.

When the surgery starts, several small incisions are made into the joint. These are usually about one-quarter of an inch long. The number varies from one to about six depending on what will be done. The joint is then filled with clear fluid (usually similar to the salt solution used in intravenous fluids). This expands the joint and allows the camera to work better. The fluid flows through the joint continuously to wash away blood and other material that is present during the procedure.

Once the surgery is under way, various instruments are used to perform the procedure. The camera is used to view the inside of the joint while the other instruments are used to either remove or repair the problem. If you are awake, you can watch the TV monitor and see exactly what your doctor is seeing. Still pictures or video can be taken through the arthroscope to record the condition of the joint. Your doctor performs the procedure while watching the TV monitor and guiding the instruments by what he or she sees on the TV. That’s why arthroscopy is like a very sophisticated video game.

After surgery you will be taken from the operating room into the recovery room. There you will be closely monitored by the nurses until they are sure you are not having any problems from either the surgery or the anesthesia. You will probably be able to have something to drink if you are not nauseated. Normally, you will remain in the recovery room thirty to sixty minutes.

Once you are ready to be released from the recovery room, you will probably return to where you started–the outpatient surgery department. Here you can wait with your family or friends until you are ready to be released to go home. You can probably have something to eat at this point and prepare to go home. You will be given some instructions at this point about what you should expect and what you should, and should not, be doing at home.

What are the risks of arthroscopy?

Like all surgical procedures, arthroscopy has potential complications. (Some of the more complicated procedures have specific risks.)

In general, arthroscopy requires anesthesia, and there are risks associated with anesthesia. Different types of drugs are given during the procedure that may cause a reaction–even death in very rare instances.

Thrombophlebitis (blood clots), sometimes called deep venous thrombosis (DVT), can occur after arthroscopy (usually after arthroscopy of the hip or lower extremity joints). DVT occurs when the blood in the large veins of the leg forms blood clots within the veins. This may cause the leg to swell and become warm to the touch and painful. If the blood clots in the veins break apart, they can travel to the lung, where they get lodged in the small blood vessels of the lung and cut off the blood supply to a portion of the lung. This is called a pulmonary embolism. (Pulmonary means lung, and embolism refers to a fragment of something traveling through the vascular system.) Most surgeons take preventing DVT very seriously. There are many ways to reduce the risk of DVT, but probably the most effective is getting you moving as soon as possible.

What should I do after my arthroscopy?

You will be given specific instructions about what to do after your arthroscopy depending on what type of procedure you had performed. In general, you should take it easy for several days following surgery. You should watch for any signs of infection such as fever or chills, redness around the incisions, or increasing swelling or fluid build-up around the joint. If you have nausea and vomiting that persists for more that twenty-four hours after returning home you may want to discuss a medication change with your doctor. For specific instructions for your procedure you should consult your doctor.